For FJ I wrote "The loser of the upcoming Eagles-Falcons game".
Top

The old Dolphins can get their champagne ready. Andy Reid is 13-0 after the bye week. Falcons are going to lose.
Top

FJ was an instant. I've got Angry Birds Space on my phone, although I likely would've gotten it otherwise. "In what game are pigs the villains?"

Kinda surprised Skyrim was a guess. It was a pretty big release, but only in the gaming circle I've seen. Halo is a larger phenomenon and Resident Evil has the movies. They all seemed to be thinking too 'big.' (The games they guessed were big programs...Angry Birds is a big moneymaker, but a small game.)

Thankfully I also only looked at the title of this page before actually reading it:
http://kotaku.com/5955421/last-nights-j ... ideo-games
The best thing that Neil Armstrong ever did, was to let us all imagine we were him.
Top

Budphrey wrote:And even from the remove of 2,000 miles and two months, I could feel just how intensely Alex wanted Tori to win after interviewing her.

She was certainly easy to root for. I felt bad that she didn't do so well.

Loved her story, by the way. In college I had a friend with a prosthetic leg. We had a lot of fun with people who didn't know that.


Same here. Even though her late-game guessing blew her chances all to hell, I found her sense of humor, uh, disarming.

Yes indeed. Let's give her a hand!
Top

Fixed that for you.
Ten Pound Hammer

When Alex said she wa smissing part of her left arm, my first thought was "Which part"?
Top

lisa0012 wrote:Add me to the instaget-and-shocked-it-was-a-TS group. I'm surprised that none of you who didn't know FJ! didn't see the news about the Angry Birds sequel that just came out, Bag Piggies. Wouldn't have helped the contestants, since I don't think it was out for them, but it's been out for a month or two.

I'm a little surprised, but only because I've seen the imagery a lot on T-shirts and stuffed toys...I suppose that's the birds more than the pigs....
I've played Bad Piggies, but I became aware of it only because I've obsessively played Angry Birds...
Top

Budphrey wrote:And even from the remove of 2,000 miles and two months, I could feel just how intensely Alex wanted Tori to win after interviewing her.

She was certainly easy to root for. I felt bad that she didn't do so well.

My wife had a number of surgeries as a child due to an issue with her ear, which had to be reconstructed (by a future Nobel Prize winner, it turns out!). You don't see the ear, because my wife doesn't care about it. Tori is the same way: completely unselfconscious. Also smart as a whip and exceedingly pleasant. I expect great things from her, even if the buzzer timing was a bear, as it is for us all.
Top

davey wrote:I've played Bad Piggies, but I became aware of it only because I've obsessively played Angry Birds...

I remember watching that episode with my jaw hanging open, thinking, "I can't believe this is supposed to be a kids' cartoon."

(It's an extremely mind-bending story, involving sending objects into the past to alter reality.)
Top

I remember watching that episode with my jaw hanging open, thinking, "I can't believe this is supposed to be a kids' cartoon."

(It's an extremely mind-bending story, involving sending objects into the past to alter reality.)

My first impression of Zim was watching it for 30 seconds, screaming "WHAT IS THIS I DON'T EVEN" and turning the TV off. And getting royally squicked when the goth girl in creative writing did a report on the guy who created it. And shunning all forms of cartoons for a good 6 years. I eventually re-watched it and said "Oh, I get it now."
Ten Pound Hammer

Just an interesting note on "The Wedding Feast of Cana" - my wife and I toured the Louvre and saw this. She took a picture of me standing close to it so that it appears that I'm part of the crowd (although my polo shirt and shorts don't exactly match the garb. Still, it's an interesting shot.
"Elen sila lumenn omentielvo...A star shines on the hour of our meeting."
Top

MarkBarrett wrote:The FJ category was an easy precall and the clue gave me nothing to do other than laugh since the response was already on my paper.

"The call" vets: is that possible? Let's say today's FJ category pops up, you instantly try to figure out possible answers and you think "What else could it be but Angry Birds?" So, while you're doing your wager and pre-writing your "what is"? can you go ahead and finish your question? After all, if it's a short answer you can always cross it off and write a new one if need be.
I'm just imagining Alex saying, "Well, Mark, it appeared to me you were unable to come up with anything, so let's see how much you lost... OH!" That would be like, WAY cool.

I guess I'm asking if it's even possible to sneak a pre-call in while you're doing everything else "during the commercial."

I'm pretty sure not. From what I witnessed in the studio during the ToC taping last year, it seemed like Roger wrote "What is" on the screen during one pre-FJ time, and they had to clear it and instruct him to write it again without the verb. The idea to write a pre-call in has crossed my mind a few times (though not while on stage), but I think I'd be afraid that if I did that, they'd clear my screen and, if the pre-call was right, swap out the FJ for a new one.

Which is why you'll often see a response on the air that lacks a verb (e.g. "What Angry Pigs"). Technically correct, but it sounds like The Incredible Hulk is playing Jeopardy!
Top

The old Dolphins can get their champagne ready. Andy Reid is 13-0 after the bye week. Falcons are going to lose.

I was sure wrong about that game. It looks like the NFC road to New Orleans for the Super Bowl will go through the Georgia Dome. Tonight I have it covered both way with the 49ers flag flying outside the house while wearing a Cardinals shirt just to be a wise guy.
Top 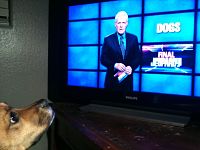 someday wrote: I love the pre-call game. My husband and I have been at it for years. We call it pre-Final. Right now our scores are 15 to 13. Most recently I got "Portuguese" right this week. That would be utterly cool to have it in the wager area.

I often end up catching the episodes out of order, so I hate to see spoilers on a previous FJ answer. I realize this affects a very small number of people, but it can't hurt to ask: can we not spoil the correct responses from previous episodes (especially FJ)? If you really want to reference clues from other episodes, you can do it without spoiling. (I know it's not as convenient, but in this case you could have said "the recent FJ about languages" or something like that.)

To add a data point, I've never played Angry Birds but this was an easy get. But I also didn't know that there were pigs in the game before seeing that WQC test, so I sympathize with people who had no clue on this one.

I know somebody made this point already, but I strongly disagree with whoever said that it was a good DD wager at the end for Meredith. True, she didn't wager $100, so it wasn't the worst wager possible, but it wasn't good. To my mind, the extra $1000 for second is a drop in the bucket compared to what you could get if you pull off the win. It may not seem like it, but given the FJ miss by the leader and her DD get, Meredith was actually in a winning position there.

The old Dolphins can get their champagne ready. Andy Reid is 13-0 after the bye week. Falcons are going to lose.


Care to revise that prediction?
Top

Sorry, missed his earlier comment. Falcons fans rarely get to talk much smack, so forgive me. I just hope they don't have another of their first round playoff exits.
Top
Post Reply
59 posts