The World of TV
In 2013 Britain marked this show's 50th anniversary with a series of stamps of the 11 actors who have played the lead role.


Spoiler
Show
What is Doctor Who? 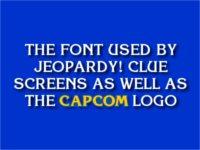 Sigh... why is it that the Finals in my wheelhouse of wheelhouses always fall on days where my maingame performance is an utter trainwreck? Big DW fan, wish its golden anniversary would at least rate a full category and not just one clue (even if it was a Final), but then again I doubt there are enough American fans to merit more on this side of the pond.
Top

4/5 in "Ear" and Push-Pull, missing only Tears for Fears and Sapphire. The latter seems really obscure for a J! clue.

Also 4/5 in Bands, missing only Cake. @#$!# fancy-pants words like "gateau". Where do you learn something like that?!

I knew Clive Davis, but couldn't pull the name. Couldn't get Tim DuBois (founder of Arista Nashville) out of my head.

The DD in the same category (Autobio) was a frustrating miss. I knew it was the Red Baron, and wasn't sure if they'd take just Red Baron, so I said… Eddie Rickenbacker.

Adjectives went completely over my head. I just couldn't decode any of the clues.

And finally, yet another 4/5 in Animals, missing only boa constrictor. My mind went blank and I couldn't think of any snake names at all. Apparently I should study snakes more.

"blah blah 11 actors who have played the lead role", and I had Doctor Who before Alex was done reading the clue.
Ten Pound Hammer

I was gearing up for an interesting FJ, and it was SciFi/British TV 101. Oh well.

Looked like it was going to be a blowout early, but the guy in the middle recovered nicely to make it an exciting game. Too bad he whiffed on that DD. I couldn't decipher all of it, but remembering the German for 'red' make it an easy guess.
Top

DD in the $400 position, in a category he obviously likes, and he doesn't go TDD? Yuck.
Top

Miscellaneous observations about this game:

In the golf category at $600, I reflexively blurted out "Who is Greg Norman?" as soon as I saw the words "Australian golfer". After saying it, I noticed the clue also contained a reference to winning a 2013 tournament, so I thought, "Whoops, that's a neg. The correct response is some young guy I don't know."

However, my Pavlovian instincts were kinder to me on the $1000 clue in the same category: "Puerto Rican golfer" = "Chi Chi Rodriguez" without much reflection or reading of the rest of the clue. Or, I suppose, "Puerto Rican golfer with some kind of quirky mannerism?" Yep, Chi Chi.

I got "curacao" on a half-guess -- I knew it was a liqueur that comes in a blue variety, but I didn't know it comes from oranges. I also thought, "Curacao is also the name of a Caribbean island so it seems to fit somehow."

I gave the same incorrect response of "Hitler" on that DD. I saw the word "kampf" in there and went for it. I knew the year sounded early, but it's not like Hitler wrote his autobiography after World War 2. Plus, Hitler was the type to write a manifesto at a young age. Now that I look it up, Hitler started writing "Mein Kampf" in 1923, so the 1917 date wasn't ridiculous.

However, I also do know the German word for "red", so that plus a WWI-era date should have given it to me.

I was mildly surprised that Sicily was a TS. Sure, not everyone knows what island Archimedes of Syracuse came from, but the clue also specified "biggest island in the Mediterranean". Of course, since Archimedes was Greek, maybe people were hesitant to guess an island currently belonging to Italy.

With embarrassment, I admit that I blurted out "Chichen Itza" for the Macchu Picchu clue. After the correct response was revealed, I said to myself, "Chichen Itza isn't even in Peru, is it."

I got FJ quickly, and wasn't surprised to see it go 3 for 3 on the show.

When I started thinking "Long-running British TV show", the very first thing that came to mind was Coronation Street, which I'm not super familiar with, but I believe it has an ensemble cast and doesn't have one obvious lead character. Then, the fact that there were so many different people playing the lead character led me to the correct response very quickly.
Top

Oh yes, and very good job by the attorney in the middle, making it close after Mark had a big lead early.
Top

I wouldn't have taken pull-top cap, as opposed to pull-top tab. What do the rest of you think?
Silver Screen Test, my movie trivia game show. Watch some of the episodes On-Demand.
Top

I wonder who Amanda Farrish's dad was who was on J! in 1997. No other Farrishes in the archive, and most of the games from that year are archived or at least the player names are.
Top

I suppose I'm not the only one who gave the Les Nessman pronunciation of Chi Chi Rodriguez. My only miss in that category was the guy from Australia.

I guess he was gun shy from going 0-3 yesterday in DDs. Still, in a second row clue in a category with a limited number of possible questions should be an automatic TDD.

I've never seen Doctor Who, but it was an instaget.
Top

Would they have accepted Chy Chy Rod-Wee-Gweez?

Did anyone else pronounce "Chi Chi Rodriguez" like Les Nessman did?

Mark got away with one here. His early dominance on the buzzer, getting a DJ round DD that was grossly overvalued and much harder than the DJ round DD that Jeffrey got, and a teen tournament level FJ clue saved him. Despite all of his impressive gets, Jeffrey did have a few reckless negs, so he does get some blame as well.

This was not a very good board. There were quite a few vague clues and overvalued clues. My jaw almost dropped when I saw that "Styx" clue at $2000.

I couldn't believe that "Sicily" was a triple stumper, although I must confess that I also blurted out "Crete" when I heard "largest island in the Mediterranean." I had to correct myself after I read the second part of the clue.

I agree that Mark should have gone all in on that J! round DD. A category on Chief Justices of the United States that is in the $400 box in the J! round? I can't think of a better scenario in which a contestant should go all in.

I only knew the Orient Express/Istanbul clue because of a recent FJ clue.

Television is a horrible category for me and I have never seen an episode of Doctor Who, but FJ was an instant get.
Top

TenPoundHammer wrote: Also 4/5 in Bands, missing only Cake. @#$!# fancy-pants words like "gateau". Where do you learn something like that?!

whammy007 wrote:Sigh... why is it that the Finals in my wheelhouse of wheelhouses always fall on days where my maingame performance is an utter trainwreck? Big DW fan, wish its golden anniversary would at least rate a full category and not just one clue (even if it was a Final), but then again I doubt there are enough American fans to merit more on this side of the pond.

Now that it's on BBC America, Doctor Who has really caught on with a lot of people. Although I didn't start watching until one of my kids got seasons 1-4 of new Who on DVD, I'm a fan and it was an instaget FJ.

I only knew the Orient Express/Istanbul clue because of a recent FJ clue.

TenPoundHammer wrote:Also 4/5 in Bands, missing only Cake. @#$!# fancy-pants words like "gateau". Where do you learn something like that?!

French class, as alamble said you learn that kind of thing, is where I got it, and I came up with it (though I wasn't super-confident).

I have Priceless Memories myself, making Autobiographies $400 easier than it already was. That seemed like it belonged in the J! round. Then again, I'm clearly on Bob's side of the Bob vs. Drew debate... (This is a Jeopardy! forum. We won't get too far into that.)

My dad avoided the Adolf Hitler negbait that a couple of people here seemed to have taken in part by realizing that roter is a form of the German word for "red". He is quite interested in German culture and I'm a small part German on his side. (1/16? I've got to dig up what I have on Ancestry.com.) 1917 screams WWI as well, and who's the most talked-about German of that war?

Instaget FJ!. The length of time sounded right to me, and Doctor Who fandom numbers its doctors.
Top

StrangerCoug wrote:Instaget FJ!. The length of time sounded right to me, and Doctor Who fandom numbers its doctors.

That seems like a recent development to me. I go back to the time when Doctor Who was mostly shown on PBS stations and I would go to parties or conventions where episodes of someone's VHS recordings would be shown. One would name their favorite Doctor by the name of the actor, as opposed to now when they say #5 or #10.
Silver Screen Test, my movie trivia game show. Watch some of the episodes On-Demand.
Top
Post Reply
85 posts