Abraxas wrote:Congratulations to Amanda on an excellent game and win. Also, congrats to John on his 5-game run. I had 41 correct responses including 4 triple stumpers: "4 home runs in one game", Nancy Reagan, Betty Ford, and condone. I was surprised that Patricia didn't ring in on the clue about Nancy Reagan, after she (Patricia) earlier had talked about conversing with Ronald Reagan. I got FJ instantly.

Oh, I missed her interview - now Alex's comment makes sense. I thought he said that because she was the only one who looked old enough to remember Reagan's presidency.

My first thought for FJ was the Hanseatic League, but "company" got me to the correct response in plenty of time.

Let's try ... NOT saying "let's try" before each clue selection. I'm sorry, but that was driving me batty.

It was a nice run, John. Congratulations, and good luck with your wife's future to-be-determined business.
Top

The "string my bow" episode was a pretty important part of the Odyssey; it was used as a feat of strength for Penelope's suitors to try to win her hand. Odysseus was the only person strong enough to string the bow, so he "won back" Penelope's hand and then slew the suitors.
-Jason
Top

I hope John Schultz makes it to the TOC. That would make it three years in a row in which someone with a connection to the Ann Arbor area gets to take part.
Top

That was a touching story about Gov. Reagan spending all that time with the kids. I wonder if others had shown up at Patricia's hospital and just done a quick photo-op and then skedaddled. Nice game today except by John but he seemed to indicate that he didn't love the DJ categories. Another easy FJ today. I'm building quite a streak now.
Top

I got crop dusting from agricultural task, but the idea of Delta Airlines crop dusting in 1966 is hard to believe. Maybe some related company with Delta in its name? Airlines fly point to point, by definition.
Top

cosmos wrote:I got crop dusting from agricultural task, but the idea of Delta Airlines crop dusting in 1966 is hard to believe. Maybe some related company with Delta in its name? Airlines fly point to point, by definition.

I know we read The Odyssey in high school, but literally nothing in that category sounded familiar to me. Guess it was too long ago.
Ten Pound Hammer

John: What did you have for lunch so that future contestants know what not to order?

Amanda: (If you are reading this) What did you have for lunch so that future contestants know what to order?

No buzz on four homers? Okay, new champ tomorrow. Maris on a rebound does not negate that one.

The last DD could have been in Aladdin, but my 31 seasons of viewing told me strongly that the other remaining category Existentialism was the much better bet to find it. The way the FJ! round played out it did not matter.

Who are the Archive search experts? Small spoiler about John's previous games.
The FJ! had me join others in knowing it had to be Dutch East India. My only debate was the word "Trading" nagging at me for some reason.

In this game: http://www.j-archive.com/showgame.php?game_id=1515 it was BUSINESS HISTORY also:

By the time it was disbanded in 1858, this company controlled an area the size of Europe & home to 200 million people

That would have been a wild 3-way tie if John had bet the farm (and got it right) to join Patricia at 11200 and Amanda had also wagered to fall there on a miss. If that had happened and Patricia had won that might have made the new tiebreaker rule light up Twitter/FB big time.

Instead John lost, but gets to play again in 2016. Patricia made a good showing and got second place money and Amanda gets richly rewarded for a good game and completing it with the sole solve.
Top

Would John have been correct if he had dropped "English" from his FJ response?
Top

TomKBaltimoreBoy wrote:Was slightly worried that it would be the Dutch West Indies Company. After all, the East India Company was active in some form until Indonesia became independent, I believe, which wouldn't be THAT long ago.

I wrote down "Dutch West Indies Company". So close, and yet so far.

Great game by Amanda and congrats to John on a fine run!
Top

Johnblue wrote:Would John have been correct if he had dropped "English" from his FJ response? 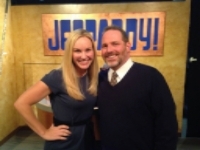 Blue Lion wrote:I hope John Schultz makes it to the TOC. That would make it three years in a row in which someone with a connection to the Ann Arbor area gets to take part.

At the moment, at least, he's #1 in the ToC standings.
Top 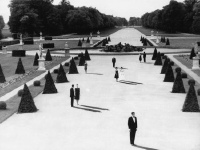 If I remember correctly, the stock certificate in question (or a fictionalized version of it) was an item stolen by the Ocean crew in Ocean's 12. There was enough TOM to get this one anyway, but that's how I got there.
Top

Winchell Factor wrote:At the moment, at least, he's #1 in the ToC standings.

Jenn McKee, the entertainment reporter who covers Jeopardy for MLive.com (formerly The Ann Arbor News), suggested tongue-in-cheek that Sony Pictures move the competition to Ann Arbor because of the number of contestants from the area.
Top

Winchell Factor wrote:At the moment, at least, he's #1 in the ToC standings.

Jenn McKee, the entertainment reporter who covers Jeopardy for MLive.com (formerly The Ann Arbor News), suggested tongue-in-cheek that Sony Pictures move the competition to Ann Arbor because of the number of contestants from the area.

As a Canton resident, I approve.
Top

I had the Dutch East Indies Company. I really would have kicked myself had I lost on the show for doing that.

I was rooting for Patricia, as I do all older contestants. She was an adult when Reagan was governor? There is still hope for me at the ripe old age of 47.

I was impressed she got Williams, did the clue mention the Red Sox? Never knew he was Alex's hero, thought it was Gordie Howe. She did lose points with me on saying Mantle and not even guessing four homers. Then we missed the last baseball clue completely.

Apologies to Tigershark, but I won't complain if they don't have anymore Broadway show plugs disguised as a category.
Top

TenPoundHammer wrote:
I had no idea on FJ!, so if you can't be right, be funny. "What is Willem's House o' Windmills?" NHO "Dutch East India Company" and I'm surprised this wasn't a TS.

IMHO I was surprised it wasn't an instaget tripleget and amazed that one contestant guessed "Mayflower Compact" although the Pilgrims did spend some time living and working in Holland before they took passage on the Mayflower and Speedwell, I doubt there was any public offering of stock in the "Pilgrim Expeditionary New World Company." And gosh John I totally expected you to get that but anyone can clam anytime, but surprise to see "British East India T.C." in the face of Dutch TOM?! I know you knew that, brother! Sigh, well congrats on a 5-day streak, well-played! Congrats to Amanda, super strong game, came out looking like a champ, good get on FJ! We expect you to prove a worthy opponent!

44 correct from staring at goats with instaget FJ and Lach trash on: Condone, Northwest Passage, Nancy Reagan, Betty Ford. NHO '4' home runs it could be literally any number!!!

Great Med clues: the Balearic Isles include, Majorca, Minorca and Ibiza. These are prime eurotourist destination for beaches. The tiny independent cities Ceuta and Melilla often come up in some context or other as "Spanish Independent Communities" they have their own flags which are often asked under vexillology. THe Bay of Biscay has got to be in the top 20 recurring clues, core know! Wonderful map with flags shown here: http://en.wikipedia.org/wiki/Autonomous ... s_of_Spain

Aladdin was good fun got 3 on 1001 nights, Jasmine and Agraba, I cannot recall these darn songs to save me life! GJ TPH going 5/5!

Odyssey more core clues with gets on all: Argus of 100 eyes > 'panoptes'; 'all-seeing' applied to Helios the Sun >> Ausos >Eos> 'Dawn' Eos was also asked as Greek letters recently (siblings = Helios, the Sun and Selene, the Moon); Hermes = the Messenger; Penelope (often a clue herself) challenges her suitors to string her husband's bow (gotta ask, was it a spare or why the heck did he leave his bow behind when he went off to war in Troy?!); Jerusalem Cross or Crusader's Cross is a big cross with 4 smaller Greek crosses in each quadrant; and Circe, who turned Odysseus' men into pigs and 'enchanted' him so he was 'forced' to live at her palace enjoying her 'hospitality' for a whole whole year... then spends 7 years with Calypso under duress, as if!

Nice heraldry clues with Eire > Harp (Wales > Leek!); NB also Aer Lingus service to Dublin, again breaking the usual pattern of no combo subjects across categories; the wavy blue line depicting NW passage was a stretch for most but it's the great white north and the way through it comes to mind, thought about MacKenzie River, but that's not across the whole north, so went with NWP. I think we will see this herald again, so much fodder for DDs and even FJ-worthy : the narwhals and compass rose on top, red field for tundra and green for tree line in Rocky Mountains, better have a look at it: http://en.wikipedia.org/wiki/Coat_of_ar ... erritories

Leontopodium Alpinum is Latin for "Alpine Lion's Paw" and the national symbol of Switzerland and Austria (Sound of Music: von Trapp family >