Before the test, someone normally posts a recent events lists (events, award winners, notable deaths etc.). Here is a start, I will update according to your input.

I also suggest that for notable deaths - there are great people who died, but some are not on J radar. For example, Jean Beliveau is among hockey greats (as reported, I know nothing about hockey), but only one hit on J.

His wife Sarah just passed away this past Saturday as well. She was the driving force behind the Brady Campaign to Prevent Gun Violence and the eventual legislation, signed into law by Bill Clinton, which bore her husband's name (the Brady Bill).
Top

Is that Bob Seger's brother?

Is that Bob Seger's brother?

lol - first of many. Fixed it.
Good enough to lose on Jeopardy!
Top

With "Charles Keating Jr. - Savings and loan scandal 1980s", would also be good to know the two well-known senators in the Keating Five:

Bringing this up: anyone else watch How to Get Away with Murder? There was an episode revolving around a financial scandal, and since the main character has the last name of Keating, her students were referred to as the Keating Five during a news report in the background of one scene.

I love little inside jokes like that on TV shows.
Total game show career losings = $171,522
Top

Oscars
Birdman or (The Unexpected Virtue of Ignorance)

Books
All The Light We Cannot See - Anthony Doerr
The Bone Clocks - David Mitchell
The Girl on the Train - Paula Hawkins
Last edited by MarkBarrett on Tue Apr 07, 2015 11:54 am, edited 1 time in total.
Top

Talk about your Freudian slips.

Hey, I have to make sure someone is reading what I post. And I like her and her music. Yikes! What an embarrassing typo.
Top

Box Office Hits of 2014
American Sniper
The Hunger Games: Mockingjay - Part 1
Guardians of the Galaxy
Captain America: The Winter Soldier
The LEGO Movie
The Hobbit: The Battle of the Five Armies
Transformers: Age of Extinction
X-Men: Days of Future Past
Big Hero 6
Dawn of the Planet of the Apes
The Amazing Spider-Man 2
Godzilla (2014)
22 Jump Street
Teenage Mutant Ninja Turtles (2014)
Interstellar
How to Train Your Dragon 2
Gone Girl
Divergent
Neighbors

(Bolded entries have hits in the j-archive database)
Top

Sports questions seem to be coming up a bit more frequently these days, and some of them have been Triple Stumpers.

NB: Laura Hillenbrand; agree pre-call for book AND film!
The corridors of my mind are plastered with 3M Post-It notes!
Top

Bookish news:
Harper Lee's Go Set a Watchman - follow-up to To Kill a Mockingbird, shocked everyone by its very existence, controversy over whether Lee wanted it published
Facebook book club - first pick, The End of Power by Moises Naim, got a huge bump in sales, but has since kind of petered out
Hachette/Amazon ebook pricing dispute

**they must be about to announce 2015 Pulitzers, perhaps even the week of the test, so I'd be surprised if these were asked about
Last edited by eboettch on Fri Apr 10, 2015 7:59 am, edited 1 time in total.
Top

I'd add Mo'ne Davis of Philadelphia's Taney Dragons, who at the age of 13 was the first girl to earn a win and pitch a shutout in the Little League World Series. In addition, she was the first Little League player to grace the cover of Sports Illustrated.

Also, I don't think anyone has mentioned the Sochi Olympics yet, so here are some notable events:
-controversy over anti-LGBT laws in Sochi
-New events: Women's ski jumping, ski halfpipe, ski and snowboard slopestyle, snowboarding parallel slalom, figure skating team event
-The US was shut out of long track speedskating medals, to their dismay
-US women's hockey team won silver, men were fourth
-Erin Hamlin won the first-ever US medal in singles luge, with a bronze

*has hits in the archive
+were brought on to read clues, but have not been a correct answer

Other music news:
-U2 released their new album, Songs of Innocence, for free on iTunes
-Jay-Z released a new streaming service, Tidal, which is the first artist-owned streaming service. Several other artists are stakeholders.
-Zayn Malik left British boy band One Direction, and the band continued as a four-piece
Top

Sadly, he only has two mentions in the archive. Maybe this will be the boost he needs.
Top

I have nothing to add but my undying thanks! I was doing up literature quiz sheet right before stopping to read this, and was extremely unsatisfied with my best sellers setup; never mind I hadn't even gotten to notable deaths.

MitchO wrote:I have nothing to add but my undying thanks! I was doing up literature quiz sheet right before stopping to read this, and was extremely unsatisfied with my best sellers setup; never mind I hadn't even gotten to notable deaths.

Typically they will have 2-3 questions on recent events - I think from 2014 is good enough. Sure you can go back to 2013 or earlier, but the goal is not to be completely blank on those couple of questions. This is only going to help if you are good with all the typical J stuff - presidents, Shakespeare, History, US States, geography, etc.

Personally, I think notable deaths are more important - as they are in news and will get couple of hits on J and then probably never.

I think what we have so far is great. I will probably keep track of latest presidential aspirants and US-Cuba relations.

Thanks to all the contributors.
Good enough to lose on Jeopardy!
Top

Most Watched Primetime TV shows of 2014 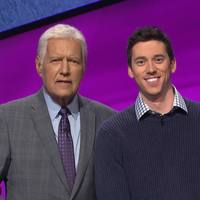 I'd bet a fair amount of money on Jordan Spieth being mentioned. Just won the 2015 Masters and in doing so tied the lowest score ever at Augusta (tied with Tiger Woods) and became the 2nd youngest player ever at 21 years old to win the tournament (behind only Tiger). He's also from Texas, which could be mentioned in the clue.
Top
Post Reply
37 posts