The end is nigh. Later this afternoon, I'll post R6D6. The round and the regular season will end Sunday at Midnight. First thing Monday morning, we will post the TOC invitation thread, including qualifiers and alternates. Then we plan to start the actual TOC on Wednesday to give some time for RSVPs and to sort out the field.

On to R6D5. Today is DadOfTwins Appreciation Day here at SHC World Headquarters.

Good luck to all.
Top

See Next Podium
In honor of DadofTwins and his clever Final Jeopardy! response during his Jeopardy! appearance.

2: At the 2008 Summer Olympics, Serbian Milorad Čavić finished in second by a 0.01s margin to this American in the 100m butterfly.

4: At the 2012 Summer Olympics, Yohan Blake won the silver medal in the 100m dash; the gold medalist was from this same country.

6: McKayla Maroney, an athlete in this discipline, scowled when she won silver in the women's vault at the 2012 Summer Olympics.

10: In the decathlon at the 1912 Summer Olympics, Hugo Wieslander finished second to this American, whose medal was revoked based on a violation of amateurism.

3: Rubies and sapphires are color variations of this mineral, a crystal of aluminum oxide.

6: This daily, acquired by Nikkei in 2015, is traditionally printed on pink paper.

9: Designed for use on woven cloth, this "colorful" type of scissors uses saw-toothed blades to leave a zigzag pattern.

12: The 1964 movie adaptation of this Tennessee Williams play starred Richard Burton as a disgraced Episcopal priest.

15: Benjamin Spock won a gold medal in rowing at the 1924 Olympics in this city.
Top

"There is much pleasure to be gained from useless knowledge."
-Bertrand Russell
Top 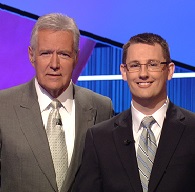 She caught the Katy and left me a mule to ride.
Top
Post Reply
89 posts