Here's Day 3. The TOC will return on Monday and finish up on Wednesday for a medal ceremony next Friday.

Good luck to all and have a good weekend.
Top

2: If you order "Scotch neat," you are asking that it be served this way.

4: Lynchburg Lemonade is traditionally made with triple sec, sour mix, lemon-lime soda and this brand of whiskey.

6: The word "whisky" is derived from "uisge beatha", meaning "water of life" in this language.

8: This sugary liquid is an infusion of ground malt before it has been fermented and distilled.

10: This island, the "Queen of the Hebrides," is known for smoky whiskies such as Lagavuiln and Laphroaig.

3: In a large painting, Jacques-Louis David depicted the December 2, 1804, coronation of these two people.

6: This Théodore Géricault painting depicts the aftermath of a French Royal Navy frigate that ran aground.

9: This American depicted Max Schmitt in a Single Scull and a surgery scene in his masterpiece, The Gross Clinic.

12: Seen here is Goya's depiction of this mythological figure devouring his son. 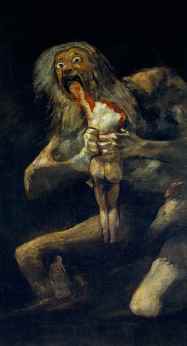 15: This French artist painted two women and a boy riding in The Third-Class Carriage.
Top

She caught the Katy and left me a mule to ride.
Top