OPENING REMARKS
Alex Trebek: Thank you, Johnny. Thank you, ladies and gentlemen. Welcome aboard. Liz won yesterday's game even though she admitted after the program that she was a little bit distracted and not at her very best. That's not good news for our challengers today, Alex and Trevor. The lady is ready to go right now. She gets to pick first in this Jeopardy! Round, so let's find out what the categories are going to be. We start off with...

Alex Trebek: Trevor Moore is from New York, and he auditioned for our program right after brain surgery. Did they take something out or put something in?

Trevor: They put--sorry, they took out a blood clot. I got hit by a car and was bleeding from my brain. So, I came into the audition with a, uh, bunch of staples in my head and a messed-up haircut.

Alex Trebek: Oh, and how did it affect you with--your partial memory loss, or--

Trevor: No, I think I'm good. I just got to get out of the hole now.


Alex Trebek: Alex Maggio is a writer whose wife is an actress, and this past season, we saw the last episode of a very popular series called Mad Men. Your wife had a cameo in that.

Alex Maggio: Yes, she did. She played a secretary on that show for the last two seasons.

Alex Trebek: And you were jealous at one point.

Alex Maggio: Yes, I was. We went to a wrap party, uh, and across the room, I saw Jon Hamm kissing her on the cheek, uh, and I was immediately furious. Uh, but then he shook my hand and I forgot all about it, and I think he's a great guy.


Alex Trebek: Liz Fritz is our champion. She is from Kansas. And she was a pretty good softball player at one time, weren't you?

Alex Trebek: Didn't that help you get a scholarship?

Liz: It did. I got a college scholarship for it.

Liz: In college, I played outfield.

Alex Trebek: Outfield. Were you a good hitter?

Liz: Let's not talk about that. I was defensive specialist and a great bunter, so...

TRIPLE STUMPERS IN THE JEOPARDY! ROUND
COUNTRIES' NATIONAL ANTHEMS $1000: "Hatikvah"
(Alex Maggio: What is Finland?)

2-LETTER ABBREVIATIONS $800: This electrolyte delivery system has a point

TRUCKING $600: In the 1920s the Fruehauf Company introduced the refrigerated trailer using ice & this compound
(Trevor: What is liquid nitrogen?)
(Alex Maggio: What is Freon?)

HORROR FILMS $1000: The 2012 movie in this franchise features Katie Featherston as the demon-possessed Katie for the 4th time

It's the only capital named for a signer of the Constitution. 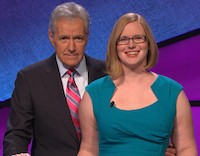 [looks at categories as they're revealed]

A shame this wasn't his board. It even had a DD in it.

Kind of a bleah game. A near lock but he had way too many negs.

FJ led me to capitals named for presidents. Madison is the father of it, so he likely signed it.
Top

No more will we see the lovely form and face of Liz, and it's too bad.

The new champ seems pretty weak. He was obviously frustrating Liz on buzzer speed for most of the game, but there were a tremendous number of stand & stares. At one point late in DJ -- I think Liz's only score in the 2nd half of DJ was "unbalanced" -- he had a runaway but blew it because of his willingness to make wild guesses and Liz's one aforementioned score.

I got FJ correct but wouldn't have been surprised if it had been either a triple get or triple miss.
I'd rather cuddle then have sex. If you're into grammar, you'll understand.
Top

Congrats to Alex on his win. I had 36 correct responses including six triple stumpers: Israel, salt, Lizst, primer, select committees, and Dreiser. I also got the missed DD of Green Mountain Boys, and I got FJ.
Top

WNEM aired a Time-Life infomercial instead of J! Good thing I have We Barely Know Broadcasting to back me up, even if in SD.

I've given up even trying to remember which Dakota has Rushmore. I keep getting hung up on "Well, Pierre is a tiny capital, that means SD has nothing to offer."

I knew it even if I clammed, but I thought Liszt was steep for $400.

Celebrity Alma Maters was a "who cares?" category for me.

Beanbags can be tossed around?

Okay, I can do this. Lansing? Nope. Indianapolis? Nope. Springfield? Nope. Try one that sounds like a name. Jackson? Nope. Pierre? Nope. Austin? Nope. A big one? Boston? Nope. Denver? Nope. Little Rock? Don't be ridiculous. Jefferson City? Nope. Well shoot, I'm stumped. Go on, tell me what it is. Yep, Wisconsin just wasn't on my radar even though I'm only one state away.
Ten Pound Hammer

LT: 4th podium blowout with 8 gets: Hatikva anthem >Israel; "I.V." ...electrolytes; Ice and SALT (Fahrenheit's original freezing formula, applied to Freuhauf 'ice box technology!); Liszt' Hungarian Rhapsodies; Primer (AT Fav, this one "New England...>"); Green Mountain Boys (Ethan Allen, VT); Sister Carrie > Theodore Dreiser; Gustav Holst (Mars) The Bringer of War (The Planets). No get on 2 TS: "Politics ain't a 'bean bag'; and paranormal activity (was leaning to "Poltergeist" but hadn't heard of another sequel, so no trigger pulled.) Pretty sure this was a runaway from the 4th.

Kicking them around? That's what we always did with them when I was in high school.
Ten Pound Hammer

I had the exact same thought. Sorry, Dave. Easy category, too, even if I embarrassingly bit on the only-sort-of-negbait of The Bahamas instead of The Netherlands. (It had Nassau right in the name!) Not my costliest miss of the night, though. That honor goes to my misreading congressional "proceedings" as congressional procedures and therefore negging Robert's Rules of Order for The Congressional Record. That's $4,000 down the tubes.

Alex flubbed the politics quote. There's no "a." It's "politics ain't beanbag," meaning that it's a rough-and-tumble contact sport.
Sprinkles are for winners.
Top

Kicking them around? That's what we always did with them when I was in high school.

Kicking them around? That's what we always did with them when I was in high school.

No, because I had never seen anyone toss one.
Ten Pound Hammer

I think most of the regular boardies thought of dhk during this game.
The champ had some headscratching negs...Rangers in Vermont? And some others I forgot.
It's rare for me to have a instaget on FJ. Probably will poll high.
Good enough to lose on Jeopardy!
Top

Instaget on FJ although I considered Jefferson City after I wrote down Madison. (Jefferson would have signed the Constitution if he wasn't in France at the time.)

Alex didn't play particularly well; he had a lot of bad negs (including on DD's) and amassed his lead mostly by virtue of dominating on the buzzer. Liz was visibly frustrated at her repeated inability to get in on the signaling device. It was a meh game in general; lots of questionable LT. Not as bad as last week's clunkers, but another game that was frustrating to watch for those of us currently in the contestant pool.
Follow me on twitter, even though I rarely tweet! https://twitter.com/hbomb_worldwide
Top

No, because I had never seen anyone toss one.

No, because I had never seen anyone toss one.