Didn't know Stromboli was an island in the Mediterranean. Knew it was the name of the film Ingrid Bergman made where she wound up leaving her husband for the director, Roberto Rossellini (in real life, not in the film).
Top

bomtr wrote:
Less than sterling play all around tonight, plenty of trash to lock from the fourth. I did think some of the clues were not so well-written. The one that comes to mind was the one where they were going for seductive; opposite of repellent (?) could bring any number of words to mind. They gave the etymology, but that's rather obscure and hard to parse in five seconds, unless you're conversant in Latin, of course. Tough boards, but lots of rough guesses all around.

I thought that was easy just for the presence of the syllable duc in the Latin (and Cleopatra's reputation). I did find it tough, from the phrasing, to know that that other clue was looking for veritas
Top 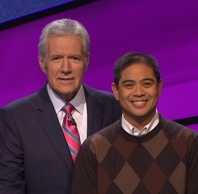 doihavetoreally wrote:Ala slams rule expected Ben to win. As pointed above, Ben ended up with same score as he had after first category run. What a roller coaster it must have been - starting a game with a category run, brutal DJ round and that FJ! At least he wagered all in FJ.

I agree that Tony Romo was way overvalued...I couldn't get earlier cules, negged with MJ for Basketball clue

Blurted out Gulf of Sinai

for Gulf of Suez (are they interchangeable?)

DJ round was tough for me too...man so hard to stay clam.


Category 13 wrote: I'm sure he would have beat Amelia to the draw but would he have come up with the correct answer?

Lets hear from Ben on how many times he got beat.

It's been a few days since my appearance, and since I put myself out here after lurking around previously, I'll man up and offer my thoughts:

1) To those who sent me messages of support, thank you! I really appreciate it.

2) I was not aware of "Slam's Rule" - if I had know about it, I probably wouldn't have posted when I did, just to keep the streak of the rule alive.

3) While I was fortunate to start out well on the J! round, the DJ! round was pretty difficult. It really was a roller coaster. Despite that, I had my opportunities. The turning point for me was not getting my Daily Double (whale shark). In addition, I thought for sure I knew the two sports captains answers that I missed (Jack Nicklaus, Ted Turner). In the end, I didn't "stay clam" enough, as evidenced by my tries in the Cleopatra category (seductive, aqualine).

4) Watching the game again on TV, I recall quite a number of answers that I knew the question to, but just got beat out on the signaling device.

5) Final Jeopardy! was especially brutal - IMO it really was an EYKIOYD answer. The 'clues' that were in the answer were not totally helpful, and I had never read the book nor seen the movie. So my chance was lost. But man, I really wished I was able to force that tiebreaker! However, I suppose knowing it was probably one of the more difficult FJ! answers in recent memory (at least based on the JBoard poll) makes the outcome a bit easier to accept.

Regardless of the outcome, I wouldn't trade my Jeopardy! experience for anything else in the world. I'm so happy I got to live my dream. Not many people can say they did.

Best,
Ben
Lifelong fan who got to live his dream behind the Jeopardy! podium (1/14/16)!
Twitter: @BenAlmoite
Top
Post Reply
63 posts