OPENING REMARKS
Alex: Thank you, Johnny Gilbert. Thank you, ladies and gentlemen. I'll begin today with a bit of background information for all of you. Only four Jeopardy! champions in our entire history have won more games or more money than Austin Rogers, so he is in some very elite company. Scarlett and Sean, good luck. You're gonna need it. Here we go. Here are the categories for you, players...

THE INUIT $1000: Inuit sculpture is in high demand; a favorite subject is this beloved five hundred-plus-pound creature of their homelands
(Austin: What is a yak?)
...
(Alex: It's like a yak, but it's a [*]. My favorite animal.)

Alex: Sean Chong is a medical student from Maryland whose first date with his girlfriend was at a special club. What was it?

Sean: Well, it was a cat cafe. My beautiful, amazing girlfriend Mariel, who's in the audience tonight--I love you so much--our first date was at a cat cafe. While we were there, we fell in love with this absolutely cuddly and adorable cat that sat in her lap the entire time. And five weeks later, we went back and took her home with us.

Alex: And what exactly is a cat cafe?

Sean: You pay money to hang with cats and drink coffee.

Alex: It worked out for you.

Alex: She's in the audience.


Alex: Scarlett Sims, a stay-at-home mom from Tennessee who met her husband at a college quiz bowl tournament.

Alex: All right, and you're still together.


Alex: Austin Rogers is our champion. He is a bartender, and I have good news for you. Because we did not phrase our clue exactly the way we should have, your response of "whale" for that blubber clue, instead of "seal", has been deemed by our researchers to be acceptable.

TRIPLE STUMPERS IN THE JEOPARDY! ROUND
ALL THE "BEST" $1000: An assistant at a memorable event, or a Gore Vidal play title

THE END IS NEAR $400: A standard 9-month term of the group seen here normally ends in this month

GEOGRA"P" $1600: In the 17th century its location at England's southwest tip made it the target of pirate raids

EIGHTYSOMETHING $1600: In 2015 at 86 this Mesa petroleum billionaire started an alliterative "podcast" with his thoughts on energy
(Austin: Who is Ross Perot?)
...
(Alex: Who is [*]? You're now in second place.)

EIGHTYSOMETHING $2000: This British Nobel Prize-winning author of The Golden Notebook was 88 when she published Alfred and Emily

STARTS OR ENDS WITH A TREE $800: A guru's retreat in India

VENUSIAN MONOLOGUES/MARTIAN CHRONICLES
Three-quarters for first place. Shore's Conjecture.
Scarlett: Wager $12,001 to cover Austin, but no more than $15,599 so as not to fall behind Sean's doubled score. If you're a fan of shoretegic wagering, you might risk $6,401.
Austin: You ought to wager between $4,601 (venusian) and $7,400 (martian), thereby safely covering a $0 bet by Scarlett.
Sean: Too bad for you, Sean, your score is less than Scarlett's score minus Austin's score. Unless they both commit an egregious wagering error, you've no hope of moving into first place. Wager as much as you desire, but remember, you'll have better chances of advancing to second place if you have a larger sum left over on a Triple Stumper. MISCELLANEOUS INTERESTING CLUES
THE INUIT $200: Skilled Inuit using special knives cut blocks of ice to build this and complete one in a couple of hours

THE INUIT $400: As far back as 3000 B.C. on this type of weapon, the Inuit used the togglehead seen here; it rotates to stay in the whale

THE INUIT $600: Vital in the dark winter, the qulliq is traditionally fueled by the oil of this animal whose skin and bones were also key resources
(Austin: What is the whale?)

THE INUIT $800: The creation of this Canadian territory in 1999 allowed the Inuit to be in charge of their cultural and political destiny

HELLO, DOLLY! $1000: This line of dolls includes First Day of School Frankie Stein
(Austin: Oh, oh, man, What are, Monsters, something, no.)

HELLO, DOLLY PARTON! $2000: In 2016 Dolly created My People Fund & hosted a telethon to help her fellow Tennesseans affected by these
(Alex: I guess the fact that you're from Tennessee helped a lot with that category.)

THAT CRAZY 14th CENTURY $2000: 1345: A dying man coughs up ritual food that then wouldn't burn in the Amsterdam "miracle of" this consecrated bread
(Alex: The Host.)

GEOGRA"P" $1200: In Southwest Jordan, you'll find this city of temples and tombs carved from the surrounding rock

EIGHTYSOMETHING $800: At age 89 virtuoso Arthur Rubinstein gave his last public concert on this instrument
(Scarlett: What is violin?)

It was *Miss Scarlett in the studio with the buzzer as Austin was Mr. Boddy.

Austin was given some bonus money with the whale reversal happening after his DD miss. If the judges had handled matters sooners Austin would have been at zero to start the second segment instead of 1200.

*Scarlett Sims could be a Miss or Ms. and Miss Scarlet in the board game Clue is one T.

Scarlett Sims from Tennessee took names and numbers in the Dolly Parton category.

For the FJ! round let's just say I've seen that movie more than once so not going to miss it.
Top 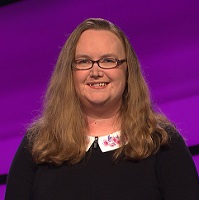 Wow, nice job, Scarlett, and of course a very impressive run for Austin.

My mom is always daydreaming about a category on Dolly. I'll have to tell her about this, if she hasn't seen it already!
Top

Hey Scarlett here, just signed up for the boards to post in this topic.

Where on earth does it air early enough for there to already be results up?
Top

Ok I noticed that when looking up for a friend in Montgomery where he could watch it, but I thought it might be the previous day's episode because that's so early.
Top

Here's a comprehensive list of all 208 stations that air Jeopardy!, compiled from actual TV schedules.

Congratulations, Scarlett! Apart from taking down an ultra-champ, $21,200 without the benefit of a Daily Double is an impressive feat. As it happens, Nancy Zerg, Victoria Groce, Diana Peloquin, Brian Loughnane, Michael Baker, and Margie Eulner Ott were all one and done... I like your chances to accomplish something unique in the show's history tomorrow!
A full list of where and when Jeopardy! airs

Congrats Sims. That high five at the end is great. Feel free to add the story. Dolly Parton is tailor-made for you.

Good comeback by Austin but the negs towards the end were costly. I'm going to take the field over Austin in TOC. 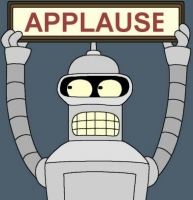 Ok I noticed that when looking up for a friend in Montgomery where he could watch it, but I thought it might be the previous day's episode because that's so early.

I had to feel for Sean, living one of our most common Jeopardy fears: getting repeatedly and visually buzzer-beaten (though couldn't tell if it was from being too early or too late.)
Top

After a certain category earlier this week, I thought it was funny that we had a contestant from Silver Spring.

Congrats to Scarlett, who played very well and took away Austin's usual buzzer dominance. $21,200 is an impressive Coryat for a first game.

Austin could have won this game but his perennial inabillity to stay clam, combined with not going completely all-in on his DJ DD's, did him in (I think -- I'll have to run the numbers later). And this time when he again got an easy FJ right (finishing an amazing 12 of 13 on FJ's), he didn't have the sole solve he needed. Still, it was an outstanding and memorable run and we'll see him again next month and probably in a future super-tournament.

I hope he worked on FJ wagering strategy before taping the TOC.

It's also a little disappointing that by losing today, Austin is forever frozen at $612 behind Matt Jackson for 5th place in all-time regular-play earnings and also missed a chance to pass Julia Collins and David Madden for 2nd all time.

ETA: It's also disappointing to me that Tim Kutz is now officially out of the TOC.
Follow me on twitter, even though I rarely tweet! https://twitter.com/hbomb_worldwide
Top

I was fully expecting that $1200 from the reversal to be the difference in the game.

Scarlett: what a game.
Top

This game is a loss for the Weak Form of Shore's Conjecture. The second-place player bet "big." --Bob
Top

Our long national nightmare is over. The champ was on the defensive for nearly the whole game. Nevertheless, he demonstrated his knack for finding DDs. When I saw how easy FJ was, I suspected Scarlet would win.
I'd rather cuddle then have sex. If you're into grammar, you'll understand.
Top

Gotta admit, I have never heard of J.G. Ballard or (after looking them up) any of his books.
Top