OPENING REMARKS
Alex: Thank you, Johnny. Hello, my friends, and welcome to our show. A warm welcome to Caity and Hilary, the challengers. Marcus, good to see you again. Let's go to work in the first round. Here are the categories you three are dealing with...

NOTABLE NAMES $800: This Scotsman came to the U.S. in 1871 at the invitation of Sarah Fuller, a teacher at a school for the deaf
(Marcus: Who is Gallaudet?)

Alex: Caity Willox is from Skokie, Illinois. And you're a member of the oldest volunteer choirs in the United States. Tell me about it.

Caity: The Apollo Chorus of Chicago has been around since the Great Fire of Chicago 1872. And continually sings the Messiah every Christmas, for 145 years.

Alex: I understand you get to travel a lot, but not because you want to travel. It's because of your wife.

Hilary: My wife, Laurie, likes to travel, and I just go along for the ride. We have ridden mules in the Grand Canyon, we've swum in the Mediterranean, we've walked on the Great Wall of China. But we've never been south of the Equator. And I want to take a cruise south and go through the Neptune ceremony if that's available for tourists.

Alex: All right, that's great. Good for you.


Alex: Marcus Gresham is our champion. A WRAP facilitator. Now when I say that, people are going to think it's rap music.

Alex: Okay. Good work. We need people like you.

TRIPLE STUMPERS IN THE JEOPARDY! ROUND
MOUNTAINS $1000: The trio seen here tops out just around 10,000 feet in this range of the Alps with the same name as a mineral

KEEP IT DOWN $400: On "Seinfeld" Jerry is compelled to wear one of these after an encounter with a "low talker"
(Hilary: What is a hearing aid?)

KEEP IT DOWN $800: Roger Maltbie's hushed golf commentary voice earned him the punning nickname this "Whisperer"
(Alex: Not the Horse Whisperer, but [*].)

A MANIA FOR MANIAS $2000: Pontius Pilate probably had ablutomania, an obsessive need to do this
(Marcus: What is wash? ...What is [*]?)

TRIPLE STUMPERS IN THE DOUBLE JEOPARDY! ROUND
WET SCIENCE $2000: The lake in the center of the Kawah Ijen this in Indonesia has a pH of less than 1

RUSSIA "N" $2000: It follows "Nizhny" in the name of the Russian city formerly known as Gorky

BOOKS & AUTHORS $1600: "The Encircling Sea" is a chapter in her nonfiction book "The Sea Around Us"

BOOKS & AUTHORS $2000: Kind of like a Swedish Forrest Gump is the novel called "The 100-Year-Old Man" who did this "& Disappeared"

A MANIA FOR MANIAS $1600: Similar to TV detective Monk, you have a compulsive desire to do this if you have arithmomania

VENUSIAN MONOLOGUES/MARTIAN CHRONICLES
Four-fifths for first place.
Marcus: Wager $10,801 to cover Caity.
Caity: Try wagering $799, which is as much as you can put up against Marcus without being usurped by a doubled score on the part of Hilary.
Hilary: There's no way you can cover a rational wager by Caity, but if Caity decides for some reason to wager everything, you can eke out a win on a Triple Stumper if you wager no more than $1,400.

FINAL JEOPARDY! CLUE
Of Germany's 16 states, these 2 at opposite ends of the country begin with the same letter & are the largest & smallest MISCELLANEOUS INTERESTING CLUES
MOUNTAINS $400: "Mountain range mother" in Spanish, it's the collective name of 3 mountain ranges in Mexico
(Hilary: What are Sierra Nevada?)

THINK PINK $1000: The Casa Rosada, or Pink House, is the president's mansion in this second-largest South American country

FINAL JEOPARDY! CLUE
Of Germany’s 16 states, these 2 at opposite ends of the country begin with the same letter & are the largest & smallest 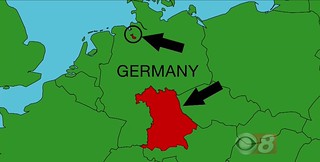 Hilary had some nice pop culture gets with the Dave Pilkey character and the Captain America quote.

Hilary’s mention of wishing to go through the Neptune Ceremony reminded me of my dad’s navy photo scrapbook that showed my dad in a pit of garbage as part of his crossing the equator ritual.

Caity got correct nods for naming the “Rosebud” movie when it wanted the character and for saying “specific gravity” on this $1200 clue in WET SCIENCE: A halocline occurs when fresh water sits on top of salt water, the separation caused by the difference in this

when Alex was looking for density.

There was a Tom Petty clue in October and another in this game. For another name recently in the news there was this one in BOOKS & AUTHORS $800:
He calls himself a “Giant of the Senate” in his memoir detailing his unlikely turn from comedian to politician

Caity trailed 14800 to 15600 when she found DD3 on clue 30. She went for the lead with a little extra and on the miss still had Hilary more than doubled. Caity was in good shape if the FJ! clue was a tough one. It was although Marcus got an impressive solve on his (what he mouthed), “Total guess.”

Like the 2-part geography FJ! clue from last week I had another half right miss. For the small one and looking for something B I wrote Baden-Baden for something German I recalled. Turns out it’s a town and not a state and no way I get Baden-Württemberg. Not to mention that J! would not ask players to write that one.
Top

My reaction to today's "Giant of the Senate" clue prompted my son to ask an earnest question: "Why does Jeopardy! make you scream so much?" (To be fair, the hollerin' was partly leftover Bears angst from Sunday.) I was rooting for my fellow Chicagoan Caity, whom I had met on the previous taping day, but now I join J!Nation as we collectively anticipate Marcus' next shirt!
Top

Interesting timing on the Pocahantas clue.

While it was obvious what they wanted, people don't really refer to Roger Maltbie as "The Golf Whisperer".

Marcus left an obvious $1000 on the table on the first DD. In DJ, with two full categories and two DD's remaining, Caity goes to the top of a category. Sigh. Then Marcus does the same thing with one full category remaining. Sigh.

While Caity's DD wager was good, judging from her FJ wager it was a happy accident.

In the end, a very nice solve in FJ to win the game by Marcus.
Top

The show teaches you many things. Today I learned Bohemia is in the Czech Republic. I'll be checking the 1/2 box on Saturday.

I thought all three players were fun to watch and charming in their own way.

I went 3/3 on DDs thanks to a lucky guess on Jack the Ripper.
Top

Getting half of FJ! right seems to be the thing to do. I went with Black Forest, trying to think of what the other B was. Not the worst guess, not the best.

"Course whisperer." It's "The Course Whisperer" that you wish to allege people don't really refer to Roger Maltbie as.
Top

Part of me wanted to say Hesse and Hamburg, but I was pretty sure that the southeast one was Bavaria, and I also guessed Bremen as just something that began with the right letter that would be in that part of Germany. I also really want to praise Caity's wager on that last daily double because it was big enough to take the lead if she got it right and small enough that it wouldn't risk going below 3/4 if she got it wrong. Tomorrow, one of the challengers is from Seymour, Indiana, so southern Indiana will really be represented.
Top

Glad to see Marcus win. I had rooting interest in Hilary, as I had a cousin (recently passed) that lived most of his life in Milford and two other cousins in nearby Stratford.
I have no idea where Hilary was going with that FJ wager. He should have capped his bet at 1398.
Top

The perils of pre-taping: Al Franken and Pocahontas are not responses you would want to be looking for today.

27 right, 1 wrong today, which is a new personal best, so hooray! Strangely, I didn't 5/5 any category, but I did get at least one right in each. If only I didn't fall for the Commander-in-Chief trap.

Very nice game to start the week. I don't think that any of the players were "out of it" at any point. Very difficult FJ that Marcus pulled from seemingly nothing. If I'm picked for the Tuesday game, I'm scared of Marcus. He's very comfortable at the championship lectern, and he seems like a guy who could hold his own no matter what the category was. It must be intimidating enough knowing that he has a better wardrobe than everyone else.
"It's always better to know a thing than not to know it." -Samuel Parr (as cited by Ken Jennings)
Top

BennyBXB wrote: ↑
Mon Nov 27, 2017 8:20 pm
The perils of pre-taping: Al Franken and Pocahontas are not responses you would want to be looking for today.

At least the Indonesian volcano they referenced isn't the one that's about to blow.
Top

BennyBXB wrote: ↑
Mon Nov 27, 2017 8:20 pm
The perils of pre-taping: Al Franken and Pocahontas are not responses you would want to be looking for today.

At least the Indonesian volcano they referenced isn't the one that's about to blow.

"Today's episode of Jeopardy was taped before the tragic events in Pompeii last week. We send our thoughts and prayers..."
"It's always better to know a thing than not to know it." -Samuel Parr (as cited by Ken Jennings)
Top

"Nostomania" = "go home" seemed very specific for the top box. I could think of a lot of things you'd want to do on a long vacation. Almost guessed "rest".

I joined the two challengers in having only Bavaria. Bremen doesn't sound familiar to me at all.

Seinfeld is slightly before my time and I don't watch the reruns, so I relied on knowledge of a certain Ken Jennings game to get to the Puffy Shirt.

And now I am off to do research on German states.


Category 13 wrote: ↑
Mon Nov 27, 2017 8:15 pm
Glad to see Marcus win. I had rooting interest in Hilary, as I had a cousin (recently passed) that lived most of his life in Milford and two other cousins in nearby Stratford.
I have no idea where Hilary was going with that FJ wager. He should have capped his bet at 1398.

Judging by my quick math, Hilary may have intended to cover Caity in the event that she wagered $1 more than Marcus' total and missed.
Dumb college kid. Go BR!
Top

Golf wrote: ↑
Mon Nov 27, 2017 7:27 pm
Marcus left an obvious $1000 on the table on the first DD. In DJ, with two full categories and two DD's remaining, Caity goes to the top of a category. Sigh. Then Marcus does the same thing with one full category remaining. Sigh.

During every orientation, contestants are cautioned that NOT starting at the top of a category can be risky, especially if the writers throw in a cutesy angle that may be trickier to grasp if approached out of sequence. As this logical pattern of gameplay continues, may we be granted the serenity to cope.
Top

No. He is definitely not referred to as "The Golf Whisperer".

Furthermore, he is also not referred to as "The Course Whisperer".

It's not terribly obscure for people familiar with the greatest television comedy of all time. But if you're not, I agree "hearing aid" was an obvious guess. We apply the YEKIOD tag way too easily for my taste, but this one probably warrants it.
Top
Post Reply
107 posts