12/25 FINAL JEOPARDY! CLUE
A prefatory poem he wrote to one of his novels tells of "the dream-child moving through a land of wonders wild and new"

12/26 FINAL JEOPARDY! CLUE
As a response to new developments there, this territory was carved out of the Northwest Territories in 1898

12/28 FINAL JEOPARDY! CLUE
This list of 12 may have been inspired by a biblical garment decorated in 4 rows, the top being sardius, topaz & carbuncle

The extra clues have two correct by the players followed by a double-miss triple stumper.

TIME FOR SECONDS $400: "On the shore dimly seen through the mists of the deep", begins the second verse of this patriotic song

Correct responses in spoiler box:
Extra requested clue in BEGINS WITH A SILENT LETTER $400: These breeches named for a body part were all the rage in late 18th century men’s fashion 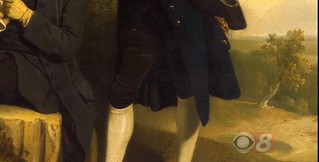 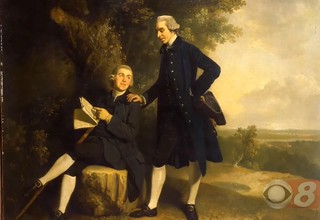 No guess on knee breeches after rejecting knickerbockers for not having a body part.
Mormons
Top

No guesses on the misses, didn't have breeches.
Ten Pound Hammer

LDS Church
The best thing that Neil Armstrong ever did, was to let us all imagine we were him.
Top

Misinterpreted dream child as star child and said Arthur C Clarke.
Said knickerbockers without considering "named for a body part."
As for Friday's FJ, I said the full name, but if I was writing it down I would have just said "Mormon Church."
Oh, what has science wrought? I sought only to turn a man into a metal-encased juggernaut of destruction powered by the unknown properties of a mysterious living crystal. How could this have all gone wrong?
Top

Never been on J!, but once won a knockoff version that aired on local access TV.
Top

Baum on Monday. No guess Thursday, Twelve Days of Christmas was the only thing that came to mind, but I knew it was wrong.

I'll ascribe my poor showing this week to holiday revelry and distraction...

Some part of me knew there was a better response on Tuesday, but my conscious brain was having Nunavut...
Remembered the Hermitage at about :32...
12 Days of Christmas on Thursday..."The Mormon Church" on Friday.
Perhaps my one coup for the week - I had no problem getting knee breeches...

I don't remember whether I got Illinois. I think I only got one in that category, and it was either that or the $800 one.

MarkBarrett wrote: ↑
Sat Dec 30, 2017 7:51 pm
No guess on knee breeches after rejecting knickerbockers for not having a body part.

Same. Maybe if it had been Stupid Answers, I would have considered something that simple.
Top

My mom was talking to my dad during the knee breeches clue, so I missed the category and the fact that the word "breeches" was in the clue, so I just said "breeches." I think I would have gotten it otherwise.
Top

Mom got Hermitage out before I did, but I'm counting it anyway (gotta love J! during the holidays!). Friday was an instaget, so I would have taken the time to write the whole thing out.
Top

Monday - picked Lewis Carroll out the gate, and pondered Frank Baum wondering which book would be more "novel-ly". I don't like the term which can be vaguely applied to everything.
Tuesday - Instant thought of Yukon, but tried to remember the new tribal province thinking it was more likely to be event related. My default would have been Yukon but I ran the clock out. I don't want to claim my first 5/5 on a sketchy extrapolation.
Got to the Hermitage with my last arrow in my Presidential homes quiver.
Got birthstones as a low confidence guess, am still surprised how high it's polling with all the negbait around 12 somethings.
Alex heard me groaning at the Broadway category, but after getting off Hamilton due to the recent vintage, Book of Mormon was right there. I didn't commit to a naming identity, bu would not have written a wrong response in any case; I've got lots of LDS friends and been in the church (they do let Philistines in:))

I couldn't make out the garment in the images. They shouldn't have had a guy in a waistcoat, they could easily have picked hundreds of better images. And Alex doesn't know how to pronounce breeches, says someone who's too big for his.
Disclaimer - repeated exposure to author's musings may cause befuddlement.
Top

My husband is wearing a Hermitage T-shirt this very minute.
Top

I knew Nunavut was about 100 years later but I couldn't shake it. Most embarrassing miss so far this season.

Yeah, I think we can throw that Breeches clue in the "horribly under valued" pile.
Ten Pound Hammer

I said Church of Latter Day Saints and I'm counting it as correct unless someone can convince me otherwise.

I misread Wednesday's clue and thought they wanted the president instead of the home, so my response of Andrew Jackson denied me a 5/5 week.
"There is much pleasure to be gained from useless knowledge."
-Bertrand Russell
Top

"Breeches named for a body part" in BEGINS WITH A SILENT LETTER is not worth more than $400 regardless of how many people get it right.
Top

"Breeches named for a body part" in BEGINS WITH A SILENT LETTER is not worth more than $400 regardless of how many people get it right.

Then why did so few get it right if it was so easy?
Ten Pound Hammer