Parcheesi is essentially sorry with dice. Knew this one immediately, as we play sorry and parcheesi quite frequently as a family. I got caught in the three muscles and just went right to triceps. I was also surprised Fire and Fury was 88%, I was one of only a few who got it wrong in my E rundle, but I have my opponent 0 and she got it. Didn't cost me though but it doesn't matter since despite being 3rd in TCA, TMP, MPD, and DEF, I am in 10th place and can't get promoted.
Top

Of course, as I walk into the local library today, what book is sitting there faced-out, on the top shelf? *sigh*
Top

I was disappointed that my opponent assigned me a 0 for the hamstring question. I have other categories that I'm better at than science. I have had 8 knee surgeries, and two of them were to replace a ruptured Medial Collateral Ligament. One surgery used the semitendinosus tendon and the other used the semimembranosus, which are both behind the knee, so I knew it was hamstrings and not the quads. I thought for sure quads would be the MCWA because it listed those two muscles plus a bicep which adds up to 4, and it was a femoral muscle and not humeral.
Top

Barely hanging onto D as I await today’s results. I will learn my fate when I wake up to go to the bathroom in the middle of the night.
Top

i always confuse Trouble! With Sorry. One’s got a dice popper, one’s got cards.
I eat chicken. That's what I do.
Top

I really don't like these game questions at all!

Embarrassed to say I put 'coconut' as the fruit (is coconut even a fruit?), thinking of 'Kokomo', which was recorded by the Beach Boys

Yep.
Never been on J!, but once won a knockoff version that aired on local access TV.
Top

I remembered a song called Cantaloop from the early 90’s or so & I knew it was based on a jazz song so I took a chance. I actually strongly considered hamstrings for the muscle question but then I switched to something else. I guess tonight is the last test?
Top

I had to convince myself that Watermelon Man had nothing to do with the island in question. Cantaloupe made sense in a nebulous manner, enough sense that I went with it, but I wasn't confident at all.
Never been on J!, but once won a knockoff version that aired on local access TV.
Top

I picked a heck of a time to get my first 1 of the season on Matchday 24. As for the questions...One of the 9 largest companies headquartered in Europe, based on revenue? Hmm...maybe Royal Dutch Shell or Unilever, or something like that...let's go with Unilever.

It's not a dice popper, it's a Popomatic Bubble and bubble rhymes with Trouble!

Finished just above the relegation line in A Taiga, but dead last in TCA! This season played harder for me than the last- no beer at all!
Top 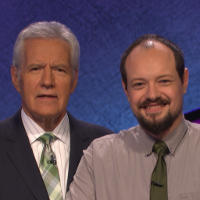 Ended LL76 with a win on perfect defense — 5(3)-4(4) — to cap a seven-game win streak (12-2-2 in the last 16 games), but still finished in a close fourth in the rundle, barely out of the C promotion zone. Third had lower MPD, TMP, and TCA than me, but had one more forfeit-win and I had a forfeit-loss, and that turned out to be the difference. For whatever reason this rundle was plagued by a 9% forfeiture rate (averaging 2/22 players forfeiting per day). My morbid curiosity makes me wonder what the standings would look like if those forfeits were replaced with the players' "average" performances. Anyway I'm still pretty darn pleased about the "best of the rest" result considering my start was so dismal.

Special shoutouts are in order for two of my J! tape-mates: Also congrats to our beloved #1 J! fan SaundersA for surviving brutal competition in A Delta with a three-game win streak that began against FeitelD. Here's hoping you soon get The Call to stand behind a lectern or two.

The truth is rarely pure, and never simple.
— from Oscar Wilde's The Importance of Being Earnest
Top

Yesterday, I was super frustrated. I had, over the previous eleven matches, gotten only one fewer question correct than my opponents, but still gone 2-6-3 with some tough defensive breaks. Over the previous eight matches, I had dropped from 16th to 22nd, having been passed by six people. Of those six players, four had gotten the same number of or fewer questions right than me over the previous eight days, and all four of those had played worse defense than me over the previous eight days. Over the same eight days, I had lost three matches with the same number right as my opponent and tied a match with more right. I was almost sure to get relegated. I was feeling inordinately unlucky, especially given my less-than-severe CAA. The only good thing was that the scheduling bot had mercifully paired me with the last-place player in the rundle (who had forfeited seven times) for my final repeat opponent.

On MD25, I get two clearly right and am hoping for credit with "earthworms" on the Annelids question (which was technically incorrect but, to be fair, given all the flatworms and nematodes and other life forms that get classified as "worms," the intended answer was sorta like saying "vertebrates" for the question "What term is used for the species in the class Mammalia?").

Before looking at my results, I look at the overall get rates. The day as a whole had played easier than I expected, and I had clearly overestimated the difficulty of "parabola" for non-math people. Maybe giving a 2 on that question for an opponent who had gotten "quadratic formula," "obtuse," and "y-intercept" over the previous two seasons was a mistake. I then find that I got credit for "earthworms," my opponent had missed "parabola," and I had won the match 2(3)-1(1). Furthermore, four of the people immediately above me had lost (all while getting 3 right as well), bumping me from 22nd to 18th and out of the relegation zone! I was going to get another season in D despite having had the third lowest TMP (by a substantial margin)! A quick search through all the other D rundles yielded only 16 players with lower TMPs who did not get relegated! I was inordinately lucky!

The fact that my fortunes could change so rapidly in a single match was a great lesson to me on the fickle nature of LL.
Top

I ended up as first loser in A Fjord, but I did win the Sandra award with my .839 DE!

Got a six-pack yesterday and my opponent forfeited. That's always slightly annoying.
Top

Got a six-pack yesterday and my opponent forfeited. That's always slightly annoying.

The dreaded "drinking alone". Congrats on your Sandra, and at least you weren't one "woulda-coulda-shoulda" from winning your rundle.

I managed to end LL76 with a 0(0) followed by a 9(6). It's my first season with two beers. I finished slightly above the middle of the pack in C Elysium, so LL77 will be my tenth consecutive season in C. It looks as if my esteemed referrer econgator will be joining Volante and mennoknight in B Taiga (hopefully the third time will be the charm). It's possible that dnbguy will be joining them, depending on parity considerations.
Top

I was doing well for a while, but the last 6 or 7 games, I suddenly forgot how to defend.


Linear Gnome wrote: ↑
Fri Mar 30, 2018 11:06 am
I managed to end LL76 with a 0(0) followed by a 9(6). It's my first season with two beers. I finished slightly above the middle of the pack in C Elysium, so LL77 will be my tenth consecutive season in C. It looks as if my esteemed referrer econgator will be joining Volante and mennoknight in B Taiga (hopefully the third time will be the charm). It's possible that dnbguy will be joining them, depending on parity considerations.

Maybe the 3rd time is the charm in B, as the last two times, I was a 1-and-done.
Top

In many ways, this was my best season ever (of the 20 I've played). But, interestingly, in a couple of ways, it was the worst.

I ended up in 2nd place in B Piedmont, which is my highest rank ever, even when counting the Rookie Rundle. It's the first time I earned a promotion to A that doesn't depend on players not returning or being moved to new leagues.

I tied for my highest non-rookie number of wins (14), most ties (6), and had the fewest losses (5), not counting the Rookie Rundle. My previously lowest number of losses was 7, but that was in Rundle C; the lowest in B was 8.

I also had my worst season in the number of 3-pointers, with only 3. And I had no 6-packs (I've averaged slightly more than 1 per season).

Next goal: beat my longest stint in A (which was 3 seasons).
Top

I don't know how I remember this, but I knew it was not Trouble, because of a commercial that goes something like:

Popomatic, pop the dice
Pop the six and you move twice
Race your men around the track
and try to send the others back.
Trouble, trouble that's the name
of Koner's popomatic game.

Well, I started out the season quite high in the standings, and fortunately I had a streak of 4 losses in a row to drop me into 7th place to end the season. I felt like there were lots more questions that I was able to take a stab at than usual for me. I ended up with 23 MCWAs.
Top
Post Reply
499 posts