Those mis-spelled insects are my Achilles's heel. I'm OK as long as you stick to lyrics, but the various facts about them always seem to slip away from me. The day of the week was meaningless for me, and the date actually worked against me, since I constantly put them a couple of years earlier than they actually broke out. I was running down the fruitless path of various westerns and pre-sitcom sitcoms. As soon as Alex added his extra tidbit, I knew the right answer.

I know two games is too early to spot a trend, but I find it interesting to note that there has been at least 1 DD in the bottom row each day.
--Peter
Top

MarkBarrett wrote: ↑
Tue Sep 10, 2019 12:30 pm
Sean posted on The Jeopardy! Fan and on Reddit that Alex told the players that the writers added the word "Sunday" to the FJ! clue.

If this had been the clue's wording:

Does that change anyone's get into a possible miss? Sean also shared that Jason said he would not have got it right without that day of the week hint.

For me it's no difference in getting the fast solve.

**********
Sean: Thank you for the mention of JBoard in your remarks and comments are fine in this thread at any time now that the game has aired in at least one market in the U.S.

Tough draw for you sandwiched with two players so good on the buzzer timing and sorry you were a day late from playing a FJ! clue you did know.


easy get..didn't even realise sunday was in the clue...would have made no difference it wasn't there...couldn't have told you the day of the week those dudes were on that show...hell...couldn't even tell you the month or the year...just knew that show had a crapload of viewers to watch those dudes perform

Dating myself, but at the time, Sullivan OWNED Sunday night. Nobody wanted their show to run in that time slot on other channels. Nobody planned any social events or meetings away from a television. People without tv wangled dinner invites with those who did. It was a "thing" for years, but the exact phrasing of how it was referred to escapes me.

I would think that was behind Alex's impulse to include the word Sunday. It's kind of a historical first "must see tv" benchmark in referring to Sunday back then, an associative clue for those old enough to plan their Sunday dinner around Ed.

One of my first, and most treasured toys, was a Topo Gigio bobble-head doll. He was about 8" high, flocked and painted ceramic head on a painted ceramic body, wearing a horizontal stripe red shirt and no pants, standing on big feet. It was a trauma when a big triangular chip came out of his jaw, but he sat on my dresser for years, damaged but beloved. 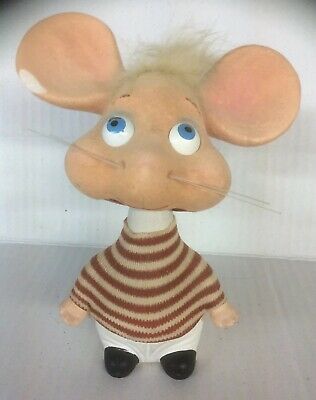 Instaget despite only being 21 years old. Still don't know old Pop Culture too well, but better than a lot of my peers.

The funny thing is, Harem pants were also a question on last night's episode of "Common Knowledge". The odds of them airing the same night. Mojito cocktail and Eloise all over again.
Douglas Squasoni
QuizUp: 131.8k games
Alpaca Farm: 1480 quizzes
Top

Anybody say Toast of the Town for FJ? Alex read out that original title in giving the correct response, indicating that would have been accepted too, even though it became The Ed Sullivan Show in 1955.
Top

davey wrote: ↑
Wed Sep 11, 2019 6:41 pm
Anybody say Toast of the Town for FJ? Alex read out that original title in giving the correct response, indicating that would have been accepted too, even though it became The Ed Sullivan Show in 1955.

I considered it but figured that even if that were still the show's name at the time, TPTB would have accepted The Ed Sullivan Show.
Sprinkles are for winners.
Top

I'm old enough to remember the Ed Sullivan Show... Watched every Sunday, so I saw that Beatles episode. I was almost 9 and remember seeing promotional articles in the newspaper about this new British band on the morning of that show.

HATED Topo Gigio! When ol' Ed would introduce that incredibly boring fake rodent, I'd just go out of the room for a few minutes.

But the almost weekly (it seemed) assault on the plate-spinning record was awesome.

Oh man, that's harsh! I looooved him! Kees me good night, Eddie. I still say that.

Thanks for posting your comments redtie, your positive personality and enthusiasm came across well, I thought. Valerie's as well. This show was enjoyable to watch because of the contestants.
Which brings to my mind this thought; because of the rules change re 5X winners, we miss seeing more of contestants such as yourself who come up against an experienced player with the buzzer speed etc.. I dislike runaways and these occur frequently nowadays but as has been posted before, anyone who has made it to the show is a winner.
Top

Would I have gotten credit for the Romanovs?
I'd rather cuddle then have sex. If you're into grammar, you'll understand.
Top

Alas, the creator of Topo Gigio, Maria Perego, has passed away. My favorite exchange between Ed Sullivan and him:

“How long, Topo, do you think you’ll last in television if you can’t sing or dance or act?” Sullivan asked in one episode. The puppet replied, “Eddie, how long have you been on the air?” — leading Sullivan to retort, “Topo, nobody likes a smart aleck mouse.”