I'm gonna sound like TPH here, but Rachel Platten seemed obscure for the top box. She only appears one other time in the Archive, for the exact same thing, and was a bottom-row clue. (A contestant got it, but it was more recent then)
Top

Hugo Z wrote: ↑
Tue Dec 31, 2019 11:43 am
Another day, another baby boomer lay-up. If you didn't grow up in the era this company dominated the market, it might be tough to differentiate it from all the others that followed in its wake.
Oh, and Karen is a lovely and talented contestant, but her timid FJ wagers are beginning to get on my nerves. Is there a category that would cause her to cut loose, just once?

Hey, man, it's her money to win or lose or leave on the table. No skin off my nose. I'd be way more bothered if she pulled some boneheaded wager that cost her a game (and ended her streak). Apart from that, no biggie.
Top

This may be in the running for my fastest FJ ever -- quick glance and saw as a gestalt "turkey," "1953," and "aluminum trays," and said Swanson out loud before AT had finished saying words "stuck with."

Earlier, after the first few clues, my wife had commented that Karen was a little slower on the buzzer than her opponents because it seemed the early clues did skew generationally. Then Charlie Puth came up and my wife and I contributed to a QS -- a quintuple stumper.
I'm not the defending Jeopardy! champion. But I have played one on TV.
Top

The Gardner Museum bit sent me back. It's weird (but apparently a legal requirement) that they keep the frames up for the stolen paintings: 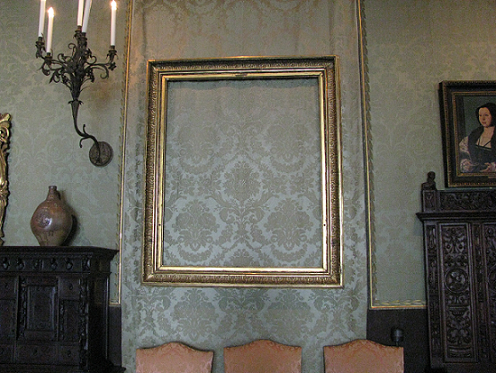 I was on the right track, but the best this edge case millennial could do for final was Birds Eye
The best thing that Neil Armstrong ever did, was to let us all imagine we were him.
Top

I'm a young Gen-Xer ('77), so the FJ! question wasn't a "I knew this from my own memory", but an "I should have known this from my parents telling me about the first frozen TV dinners" memory. Unfortunately, I picked the wrong company, and went with Birds Eye, because those are the frozen peas I buy. Oops.

I knew Chicago from "60601," but, yes, "Chicago is the third-largest city in the U.S." should be a piece of knowledge to have close at hand.

I'm only three years older than you, and I remember it being a fairly big deal in the '80s when Swanson switched from aluminum to plastic trays (to allow for microwave cooking).
Top

mas3cf wrote: ↑
Tue Dec 31, 2019 9:36 pm
I'm gonna sound like TPH here, but Rachel Platten seemed obscure for the top box. She only appears one other time in the Archive, for the exact same thing, and was a bottom-row clue. (A contestant got it, but it was more recent then)

I sure as hell didn't remember who she was (but tbh I never liked that song, anyway). But they had Seven Nation Army for $1600 and Kung Fu Fighting for $2000???

Yes, you should know what city comes after NY and LA (and before Houston).

I wonder how many people got it from the ZIP codes alone. Why do I know that 60652 is Chicago? NFI. (I would've gotten it from the population bit as well)

Instaget FJ. Swanson tv dinners do not represent happy childhood memories. I don't know wtf they were putting in them by the late 80s, but whatever mystery meat they were calling 'turkey' or 'chicken parmesean'...very much wasn't. Don't get me started on the garbage they called stuffing or mashed potatoes. The desserts were OK so I guess that's something.

A few milliseconds with just "TV dinner" before moving to the correct answer. I thought the "what will we do with all this turkey / oh, there's 6000 aluminum trays laying around" story sounded apocryphal, but that seems to be their story and they are sticking to it:
https://www.smithsonianmag.com/history/ ... -96872641/

eta: my skepticism seems valid, from wiki: So, a well put together clue, although the microwave generations may not have heard of Swanson's. I can't remember the last commercial for a frozen meal, it might have been black and white

. I think there was a "Hungry Man" variant that was the last big thing.

Next season - Please put up an on-screen scoreboard - Karen moved from almost last to a crush position before I knew it. I thought she'd lost her buzzer dominance, but she played all four quarters and made her FJ miss irrelevant.

Tough DD3 in the second row box. Thatcher was all I could come up with, but knew the clue was about not being Thatcher. I can't say I knew Theresa May was nice or another hater.

THIS! It is not money "left on the table". Golf has made the point better than my analogy of having a random stranger offer to bet you on a question of unknown difficulty, and possibly disguised as another category of question, in 30 seconds including transcription time.
Disclaimer - repeated exposure to author's musings may cause befuddlement.
Top

"I've eaten a Swanson TV Dinner" seems like a no-brainer for this week's poll?

I knew exactly what the clue wanted, but just couldn't pull Swanson tonight. My wife and sister-in-law both got it.

Why am I all of a sudden hungry for Salisbury Steak?
Top

"Pasadena school" + "big bang" didn't seem like a bottom row clue to me. But it stumped our three players, so I guess the writers were right on this one.

FJ was a forehead slap on reveal. If I'd pictured smaller aluminum trays, I think it would've clicked. As it is I joined the champ in guessing Butterball.
Top

I knew exactly what the clue wanted, but just couldn't pull Swanson tonight. My wife and sister-in-law both got it.

Why am I all of a sudden hungry for Salisbury Steak?

Eaten a Swanson TV dinner sounds like a good choice to me.
Top

World of Colors seemed very YEKIOYD. $1,200 in particular seemed not to have a TOM.

Unused turkey in an aluminum tray? Sounds like a TV dinner... which is... uh... uh... uhhhhh.... This seemed like a 1/3 on Swanson/Banquet/Hungry Man at BEST, but I had a mental block and couldn't pull any of the 3.

It looked like Jimmy was holding a plain envelope that was not official mail as I would suspect not even J! has enough pull (getting someone in probably lots of hoops) to let a civilian handle real mail? Or J! was smart enough not to display someone's real address to millions?

No get for me on the clue as I was not going to be recalling any ZIPs outside of CA and I need FJ! time to sort out populous cities on the fly. The better path would have been recognizing how the code was close enough to my cousin in Kildeer, IL who I mailed something (Shh! Portion of family/friends football pool winnings) to yesterday.
Top

I was able to get Chicago just from the ZIP code because I know that ZIP codes get bigger as you go west.

I agree on Charlie Puth and especially Rachel Platten being obscure for the top box, even if I got both. Puth has at least had multiple hits, but Platten seemed to completely disappear after "Fight Song".

What was the TOM for Cleveland? I also went with Minneapolis/St. Paul for a big city known for health connections.
Ten Pound Hammer

Case Western is there.
Top

Not one I could pull in the allotted time, but Huangdi = the Yellow Emperor (first emperor of China).

I was considering using the Manhattan = Little Apple thing as a choice in one of my TDs.
Never been on J!, but once won a knockoff version that aired on local access TV.
Top

Not one I could pull in the allotted time, but Huangdi = the Yellow Emperor (first emperor of China).

Ever have a midori sour? They're electric green. Didn't know about Huangdi, though....

I don't know why I think "vermilion" is green. You would think that between Pokemon (Vermilion City) and the vermilion border (the border between the lip and normal skin", I'd have figured that out by now.
Top

MarkBarrett wrote: ↑
Tue Dec 31, 2019 1:54 pm
In winning 4 games Karen has a wagering average of 2,120 and it would be lower if she had known the Russian ship on Friday's DD3 when the miss tightened the game.

cheezguyty: Can you find a person after their 4th win (before playing game 5) with a lower DD+FJ wagering average?


Not a huge deal for this thread, but I noticed this typo in the Archive as well; should be "Stoltzfus" (not sure if there's an easy way to suggest corrections to things other than clues. I'll happily delete this post later if need be).
Dumb college kid. Go BR!
Top
Post Reply
71 posts