WRONG (+10)
---------------
Woof (Las Vegas Raiders) - Poll: Should I allow this? Wikipedia still redirects to Oakland, and as far as I know, the franchise has not yet officially moved (so it doesn't currently exist in Las Vegas

You should take a look at https://raiders.com and see how many times the word Oakland appears there.

After review, the ruling on the field stands, for 3 reasons.

You can't currently buy licensed Las Vegas Raiders gear, as the NFL is not allowing it - "there is no Las Vegas merchandise because, per NFL rules, the team is still linked to Oakland."

Secondly, the Raiders still have an option for staying in Oakland in 2020 if construction on the new stadium in Las Vegas is delayed (though it's scheduled to open this coming summer, in time for next season). The Raiders have not had a practice or held a team function, let alone play a game, as the Las Vegas Raiders. There is not even a guarantee that the Raiders will play a game in Las Vegas next season.

Finally, the ongoing 2019-2020 season has not ended, and they were certainly the Oakland Raiders during this season.

I was watching something on the NFL Network and they had a crawl with the current draft order rolling. First, of course, is the Cincinnati Bengals, second goes to the Washington Redskins. When it gets to twelfth, it just shows "Raiders".

Hope everyone had a good weekend. I went to LA for the first time since my taping, and played Ultimate Frisbee on the beach all weekend, so that was cool. At any rate, here's Q10.

barandall800 uses the drop to take over the lead all alone, as his former co-leader submits a sheep answer. xabe also utilizes their drop to enter the top 10, while Shaquebanisa and True North submit singletons to enter as well.
Top

Meanwhile, we continue to recognize things that sparked joy for us.

Hurricane Dorian makes landfall, but does not significantly affect Alabama. A special election is held to determine the representative from North Carolina's 9th congressional district after evidence of election fraud by the Republican party cause the initial election to be invalidated. "Fleabag" and "Game of Thrones" respectively win Outstanding Comedy Series and Outstanding Drama Series at the 71st Primetime Emmy Awards.

Gee, I wonder which part of those three was helpful to me to know the month?

A sanity check just for giggles: 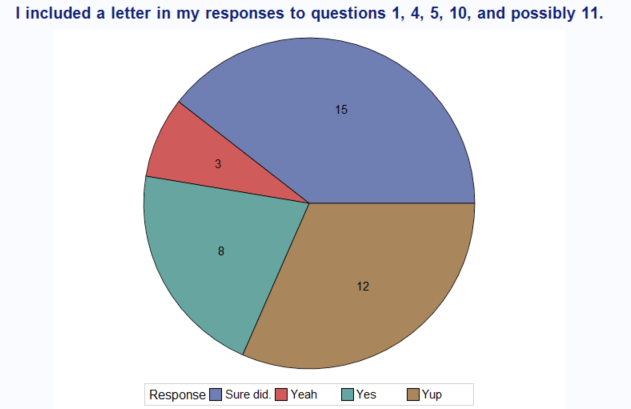 Link to try on your phone if it doesn't work:
https://i.imgur.com/kFnTKVa.png
Top

Wheelhouse bonus results are below, with comments if anything you put didn't count towards your score:

Before final standings are revealed, we have the "sports/other experiences" category of things that sparked joy for our players:
I will put myself in the camp of the last one there, along with getting married and appearing on Jeopardy.

Onto the last bonus and results:

The following players managed to go through all 10 questions in regulation without a miss, and without using a drop or sheep:

For that, they each get a (minus) 6-point bonus. Final standings:

Congratulations to barandall800, thanks to all for playing. Go play clt013's 2020 TD, and have a great year!
Top

Thanks to our gracious host, and best wishes for a fabu 2020 to all!
Top

Nice to make the podium. Thanks for the TD.

Winners list updated:
viewtopic.php?f=1&t=5380
I'd rather cuddle then have sex. If you're into grammar, you'll understand.
Top

I think the Raiders ruling was correct, given today’s news:

This may be a bit belated, but thanks for a terrific game! (All these years playing these and I barely make the podium a few times, and now I’ve won two in the past month! Crazy ...

) Congrats to the rest of the podium!

I asked a few friends this question (and posted it on my Facebook wall for debate). Two of them sent me a press release for this within a few minutes of it coming out.

With all that said, I did learn a lesson on this one - I should define stuff like "currently exists" a little better. If I had a do-over, I would have explicitly said that the teams must have played a game at their current location with their current name.
Top

I asked a few friends this question (and posted it on my Facebook wall for debate). Two of them sent me a press release for this within a few minutes of it coming out.

With all that said, I did learn a lesson on this one - I should define stuff like "currently exists" a little better. If I had a do-over, I would have explicitly said that the teams must have played a game at their current location with their current name.

While that certainly would have made the issue unambiguous, I don't mind some gray areas in the questions. After all, this is Think Different

Thanks for the game. Someday I will stop mixing up Bill Pullman and Jeff Daniels, but that day is not today

Thanks for a fun game! It was good to be able to participate.

This may have been my sheepiest TD yet, but it was still fun. Thanks for putting it together!
Top
Post Reply
56 posts