I don’t know anything about SFR other than it was a Disney movie I have never seen. But I put it down just to have something and it didn’t strike me until I wrote down Robinson what the connection was.

I guess I won’t mention my Packers ownership if I get the call.
Top

This seems appropriate and was posted a week ago. 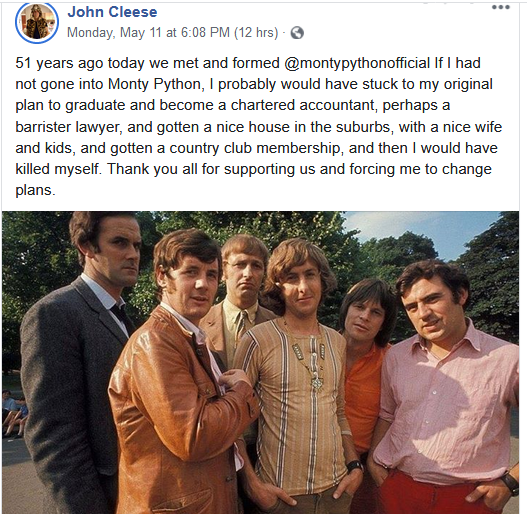 Pet Peeve alert! I HATE HATE HATE it when people attempt King James/Shakespearean English and think they can just throw in a Thee or a Thou and maybe stick an -eth on the end of a verb here or there. They always sound like idiots. THE LORD DEALS WITH THEE, BIBLICALLY is not grammatically correct. The Lord DEALETH. And unless we're talking about only one person, he dealeth with YOU not THEE. But hey, at least they got the case of the second person singular pronoun correct for when it's the object of a preposition.

Bad grammar notwithstanding, I ran that category, of course. Also ran GREAT AMERICAN SONGBOOK. The contestants had a bit of trouble with both. I loved their "No way am I taking a guess" look when asked to name what birds, bees, and even educated fleas do.

I was 4/5 in each of those two cats, but "At Last", alas, was a DD miss and being middle row, I might well have bet heavily on it.

"Twelve men" made me think of Jacob, though I guess it doesn't make much sense if you think. I might have clammed but certainly didn't know to say Joshua.

I used to be annoyed by that Ben Franklin comic who'd always say "good to be hither" on taking stage. If he says the ungrammaticality enhances the joke, no it doesn't.

Going to risk an edit. I didn't know about "John Cheese" except that it (albeit the Dutch version) is the putative origin of "Yankee", so he's the wrong Python for that name.
I'm smart and I want respect.
Top

Lefty wrote: ↑
Thu May 21, 2020 1:11 am
I used to be annoyed by that Ben Franklin comic who'd always say "good to be hither" on taking stage. If he says the ungrammaticality enhances the joke, no it doesn't.

Exactly! Rates a quick "Get thee hence" in my book.
Top

I wouldn't have gotten that if not for a Terry Fator binge a couple weeks ago.
https://www.youtube.com/watch?v=6WahdIES7Gg
The best thing that Neil Armstrong ever did, was to let us all imagine we were him.
Top
Post Reply
47 posts