I was thinking the same thing. I went to Jeopardy’s home page to specifically look for the video since we saw it for the others. Luckily I got a hit on the Detroit paper.
Top

I would like to see Linda Ellerbee do it. Was she ever on Celebrity Jeopardy?
I'd rather cuddle then have sex. If you're into grammar, you'll understand.
Top

We know Mayim Bialik has already taped, too, so she's probably up after Bill? Haven't seen anything on Savannah Guthrie yet.
Top

I figured Aaron Rodgers would be next. there isnt anyone who has been announced after Dr oz where im like theres no reason why this person should be a host aside from maybe rodgers but i really like him as a person so i dont really care.

If im doing my math right and assuming we go the amount to the end we always do, they need to announce 2 more guests hosts i think.
Top

I appreciate the somberness of Dr. Oz's hosting. He showed enthusiasm when appropriate. Katie and Mike were too consistently upbeat for my taste. The material and the contestants should be allowed to shine, the host should not be the most prominent part of the show in my opinion.
Top

An interesting working list to keep during these weeks would be of players who appeared on the show under more than one host. By my count there are only 7 so far:

*won at least one episode under each host

Obviously, this list will expand significantly with the next TOC.
Top

There have been a number of players from the Fleming era on during Alex’s run.
Top 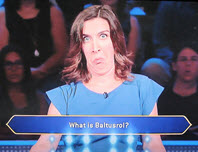 We know Mayim Bialik has already taped, too, so she's probably up after Bill? Haven't seen anything on Savannah Guthrie yet.

Interestingly, Craig is filling in for Savannah on the Today show this week. Hoda mentioned that Savannah had an assignment on the West Coast this week, so she may be taping now.
Top

Hi Everyone! My password hasn't worked for about a year. I couldn't reset it and I couldn't get in touch with the mods, so I've been able to read all of these comments but not post anything. My good fortune last week to bump into DHKendall elsewhere in social media. He got me all set, so I'm back! I've had a few thoughts on the whole guest host thing.

First off, so far, I'm pulling for Ken. He seems the most natural, the most like "my friend", and is so massively smart that he won't have to fake it, wherever the conversation goes, and yet, still seems humble and contestant focused.
The other three that I would love to see are Levar Burton (I'm a child of the Reading Rainbow/Next Generation era), Mark Hamill (really appreciates the fans/contestants, and I would love to her the Joker tell someone they were wrong) and Teller (I know he's has built a public persona of not talking, but when he does, he's ridiculously smart and fiendishly funny). Probably all older than TPTB are looking for, but I figure it would make for some great TV.
Top

Well it looks like I need to raise my expectations for Aaron Rodgers hosting next week. It looks like he brought it...

BrigadierSolo13 wrote: ↑
Fri Apr 02, 2021 1:14 pm
Well it looks like I need to raise my expectations for Aaron Rodgers hosting next week. It looks like he brought it...

He also mentions there will be a viral-worthy moment from Monday's show.
J! Archive
[Fleming ToCs]
Top

BrigadierSolo13 wrote: ↑
Fri Apr 02, 2021 1:14 pm
Well it looks like I need to raise my expectations for Aaron Rodgers hosting next week. It looks like he brought it...

He also mentions there will be a viral-worthy moment from Monday's show.

The article also confirms that the host can see the FJ! responses. In a thread last year, there was discussion about this...
Top

goongas wrote: ↑
Fri Apr 02, 2021 11:12 pm
The article also confirms that the host can see the FJ! responses. In a thread last year, there was discussion about this...

This was true at least as far back as Season 3. Alex mentioned it in a "new old" game I entered recently. https://www.j-archive.com/showgame.php?game_id=6975
J! Archive
[Fleming ToCs]
Top

And Mayim Bialik just makes it into May, with her first game being May 31.
Top

You know, I was in such a hurry to post my hilarious May/Mayim joke that I never even made that connection. Good looking out.
Top

You know, I was in such a hurry to post my hilarious May/Mayim joke that I never even made that connection. Good looking out.

If the ToC is going in that open window then I would think it could be taping next week. Ken or Mike seem the most likely to host. Watch Ken's Twitter for action (or lack of action) Tuesday the 6th & Wednesday the 7th? Does Ryan Hemmel still post his scores in the daily Reddit thread? That could be a clue as well.

I would not mind a surprise host for the ToC either and I would think the show would spill the jelly beans after taping and before airing. Buzzy Cohen doing it would be like Judge Judy's decisions with 50% agreeing on it.

Bob Harris is still in Australia? I know he has detractors due some of his past contestant liveliness while I think he has a lot of skills that would transfer to a fun & capable guest host.

I wonder if Jeff Probst's contract allows outside work? We know that Bill Whitaker can take on a side gig.

If a new permanent host is to be in place for S38 and taping will resume in July then the clock is ticking for more news sooner than later.
Top

The guest host page on the Jeopardy! website has Anderson Cooper from April 19 to April 30 and Bill Whitaker from May 3 to May 14. That's shown on the picture at the top of the page but the info farther down on the page lists their show air dates as TBD. https://www.jeopardy.com/jbuzz/news-eve ... t-schedule

I'm not sure if I would read too much into the 2 week gap on dates since it looks like they're still in the process of updating their info. But I don't actually know anything.

They might wait for a permanent host before doing a ToC. It would be reasonable for them to wait for all the contestants to have a chance to get a vaccine before asking them to travel across country. Access should be available for everybody within a month or two and I have a hard time imagining they would try to do it before then. Almost there.

Ryan Hemmel and John Focht are posting their scores on Reddit everyday. They moved it to a separate thread.
I had a dream that I was asleep and then I woke up and Jeopardy! was on.
Top
Post Reply
372 posts