FINAL JEOPARDY! CLUE
In this 2012 film set just before the Civil War, a German dentist declares that the title character’s surname is Freeman

My favorite moment of the show: Board values for three categories played to completion is 9000. The first segment totals for the players was 2800. After the J! round it was 8600. Nice work by the players to do a little better in the DJ! round to get the combined Coryat over 30,000.

The FJ! category had me struggling for a good precall and I did not better than a general sense of Disney and George VI. For a warm-up exercise I mentally ran Best Picture winners from 2010 to current just in case that was relevant.

The FJ! clue had me taking longer than necessary to solve it as I wasted time making sure it was not the double wrong response. I knew all the reasons that could not be it. In trying to get the right name I hit a couple of brick walls.

First, I could not place "German dentist" even though that seemed quite familiar. I pictured the right Oscar-winning actor to get the wheels turning. For the title of the movie I was telling myself it was not Inglourious Basterds, but that other QT picture.

Oh no, what was the name of it? I had a blank even though I could picture Leo and Sam. The music was nearly completion and I was panicking. Thankfully, the title came to me in time to get it on the paper. If not, the "D" would not have been silent in "Damnit!" since I saw the film in the theater and have it on Blu-ray as well.

What to bet, what to bet? Kelly went for the popular $1 to try to avoid the possible tiebreaker. Dan bet enough to insure second place. Dan got his $2000 locked in while missing the chance to return with over $20K and the title.

I understand why $1 is the favored play and why some others might go with the zero wager. In Kelly's place I would have gone 7500 since I liked the category and let chips fall where they may.

Yes, the popular incorrect option will be a poll choice.
Top

Boys and girls, this is why you wager $0 from the lead against certain player types.

I'd love to see the Cheezy one query his database and pull out the wagers in this scenario from both before and after ties were scrapped. How many instances, how many times 2nd place wagered everything, how many times 2nd wagered all but $1, and all other laughable wagers.

The amount of times 2nd wagers all but $1 is why you can't wager more than $1 from the lead. It's so hilarious.

But hey, as long as the contestant was just happy to be there, who cares about throwing away large amounts of cold hard cash.
Top

The week is complete: https://www.j-archive.com/showgame.php?game_id=7008
Top

Tough to tell whether she is reacting to being corrected or, as I view it, possibly just excited at being back on the plus side.
J! Archive
[Fleming ToCs]
Top 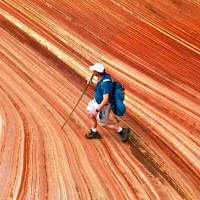 I wish I knew.
Top

I was shocked when Anderson declared Kelly the winner because I wasn't paying enough attention to Dan's wager and I assumed he would've bet everything to win.
Top

I guess maybe some people play one game and are like "I can't take this anymore!" ????
Top

Again, No Clue on Final.

Apparently Dan was happy with 2 Grand or he didn't realize the Situation he was in.

I wish I knew.

I hope someone like that is on the show with me if I ever get on.

Didn’t see the movie and thought it was more recent but it was my only guess and it paid off. The other movie came to mind but I didn’t think it really had a title character.
Top

Also, that's not how Gouda is correctly pronounced, but that's all you'll hear in the US.

No clue on FJ.
Top

When's the last game with a top row DD in DJ, and no DDs below row 2?
Top

If anyone on this board has a serious guess as to why Dan DID NOT wager everything, I would be glad to hear it.

My guess would be he is bad at math and didn’t notice the situation or else was just content with second place.
Top

Wow. EVERYTHING went right for Dan to win from his position. He needed Kelly to miss FJ AND to bet at least a dollar. Both things happened. He needed to get FJ right himself. That happened. All Dan needed to do was make a wager that would take advantage of that somewhat unlikely concatenation of events. Instead he made a wager that reduced his odds of winning from long-ish to essentially zero. Did he miscalculate and think Kelly had a runaway?

Kelly lucked out here. He shouldn't have bet that dollar, leaving Dan a clear path to victory with no tiebreaker necessary. But Dan's fortunate/unfortunate decision saved him from the consequences of that choice. Earlier, of course, Kelly made his own luck with that true DD, showing Dan what he should've done 7 clues earlier with his own DD. If Dan had had that extra $7600 that he left on the table, would he have made a better wager on FJ? I suspect he would have, but who knows? Poor guy. I bet he's been over this a thousand times in his mind. Maybe I'm wrong. But he seems like a guy who figured out what was up after it was too late to change his decisions. The game turned out to have been his to lose.

FJ was close to instaget for me but it seems not to have too much of a way in for those who don't pretty much know it. I happened to have seen the first 10 minutes or so a few years back and recalled the German dentist. 12 Years a Slave was the other obvious guess, given some but not enough knowledge, and the contestants did well to write something down on a clue where it could be difficult to come up with anything plausible. I guess that movie does have a title character, Solomon Northup, the slave in question. But it seems kind of generic.
Top
Post Reply
89 posts