Martin Luther was my answer. And as a Lutheran, I should have known that wasn't correct.
Top

Actually got some lach trash in this game with Dawn and Jaws. Jaws a triple stumper? wow

As for the FJ, it's about time Matt grew a pair.
Top

Went with More on the final - only three years off, and 1513 was long before The Prince's publication date. Not that I knew those details - just trying to hit on something political that didn't sound related to the more famous work at around that time period. On the wrong track there.
Top

Never been on J!, but once won a knockoff version that aired on local access TV.
Top

My DVR cut out about halfway through the think music, but luckily I had already written Machiavelli by that point.

I thought tonight's clues were fairly difficult. I whiffed on quite a few.
Top

Was not getting bronchodilator. Tried to shoehorn antihistamine.

I managed to pull bronchodilator. I found a stupid way to miss Jaws, though. When I saw the category, I precalled Omoo, and I tried to shoehorn it as a response for the Jaws clue.

Bravura performance by Matt tonight. When he ended the j round with 18K, I was looking for a big win. Going into FJ, I realized that he could bet big, and he did. Easy FJ clue: 15th C and affairs of state? Yes, please.
Top

Another Martin Luther here. I know Machiavellian as an adjective, but not much about the actual guy.

Thanks to Mayim, I decided to eat corn dogs tonight while I watch MNF

I'm glad there was no empty podium for FJ. It looked like a single podium possibility at first.

It seems like Matt is better at the buzzer and finding DJ's than James H was. But I may be mistaken. It seems like James' games were not locked up as quickly. Matt may be here a while.
Disclaimer - repeated exposure to author's musings may cause befuddlement.
Top

Robert K S wrote: ↑Mon Oct 04, 2021 8:37 pm I don't usually come on here and complain about the clue writing quality, but that clue about how Marconi pioneered wireless phone service didn't sit right with me. Don't look for it in the Archive.

I was baffled by If At "First" $400 (I mean, I guessed the answer, but what bad grammar are they talking about?): Sounds like bad grammar but "me" is an objective singular pronoun of this linguistic form .

Then on Before & After $1600 (Artistic Left Bank region of Paris that's a meaty McDonald's burger), did anyone else bite on "Latin Royale with cheese"?
I'm smart and I want respect.
Top

Matt was so dominant today that I thought a run at 6 digits was possible. If he found DD-2 and got it right, he may bet bigger on DD-3, and that could have put him in range.

His opponents simply had no chance. He was at $5,000 before they could even settle in. There is nothing they could have done. Even finding DD-3 would have done nothing more than limit his final total.

Matt is red hot and his scores are starting to accelerate. $2M is still a distant pipe dream, but he has earned the first $300,000 towards that goal in a hurry.
Top

I've said the same thing. And I say it again.

In tonight's game it got so bad that at the end of the first round, Mayim was acknowledging that Mike was making a real game out of this because he had answered three in a row correctly at the end of the round. At the time the scores were $18,600 to $600 to -$1,000.

This feels like being a life-long baseball fan, watching a small handful of MLB players hit 40 HRs each year, while occasionally one reaches 50, and 60 seems like a, well, rare, Ruthian accomplishment. And then some guy comes along who hits 400 in one season. It's awesome to watch, but by the end of April I almost want to watch soccer instead (hoping that no soccer player will score 30 goals in a game).

This ain't fun to watch.
Top

37R. 3/4 on big clues. Said vasodilator instead of bronchodilator.

Some clues that I missed that I want to get next time are bewildered, tempura, sublingual, ganache, and 38th parallel (bars)
I had a dream that I was asleep and then I woke up and Jeopardy! was on.
Top 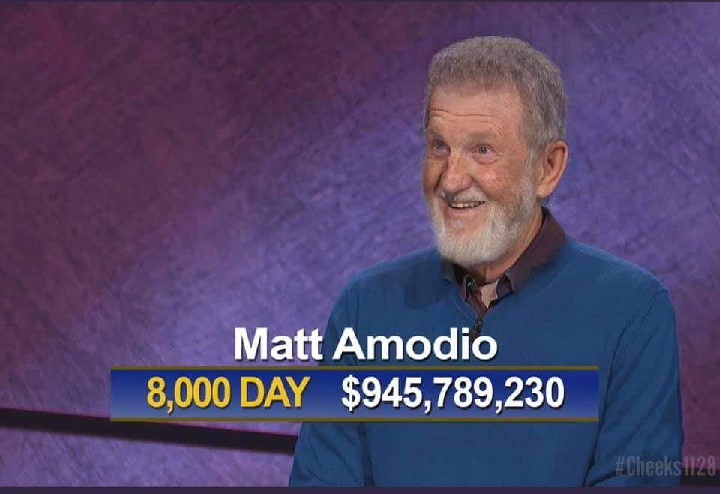 Thanks, I'll be smiling about this all day!
Top

I hear he went through 47 hosts.
Top

Gettable FJ, although I worried given the timeline it might be a Martin Luther trap of some kind.

What a dominating performance by Matt with the score to match.

I do NOT understand returning to the same category where a DD was just uncovered. To beat Matt, someone is going to have to play a perfect game AND get lucky enough to keep the DDs away from him AND get them right with big wagers. Unless he errs badly, if he finds the DJ DDs, you're cooked.
Season 27 player and lifelong fan
Top
Post Reply
46 posts