FINAL JEOPARDY! CLUE
In 1838 he took a new last name, of a family in Walter Scott’s "The Lady of the Lake"; for distinction he added a 2nd "S" to the end

The DDs went 0/3. When Ally missed DD1 it looked like Amy did not know it either. Another notch for problems with presidents.

Amy missing DD2 fortunately made no difference overall as that would have been a haunter for her being right there and not figuring out how to convert it.

The players did well with sports and TV although the Redd Foxx show going TS was easy trash at home.

Ken is once again strong with his way of saying "genre".

The FJ! category precalls were off by me with Fremont, Crockett/Boone, and Appleseed. Memo to myself: Expand the palette.

The FJ! clue had me matching the A's with no guess. It would not have made a difference though it could have helped if I had known the Scott work had nothing to do with the King Arthur area.

I'd like to think I could have solved the FJ! clue before an LL deadline although it could just as easily have been a white flag one. Nice by Emma to solve it and too bad there was no extra reward for it other than pride. It's not every Emma that can take down a 30+ or above champ.

Amy was more vulnerable than usual in this game and yet she still easily ran away with the match by the end. Losing 4K on a DD coupled with a challenger trying to add 5K on a DD could have spelled the end on a different time line.
Top

A strange game when the only player to get FJ correct had a $200 Coryat.
Top

For FJ I started by thinking of U.S. Presidents. I first thought of Lincoln, which then made me think of Stephen Douglas. I was able to make the leap to the correct person from there.
Top

StevenH wrote: ↑Wed Jan 12, 2022 2:06 pm I first thought of Lincoln, which then made me think of Stephen Douglas. I was able to make the leap to the correct person from there.

I did your first two things and stopped there, thinking his last name had two S's. 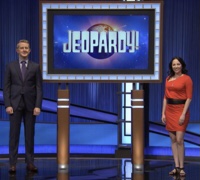 I was slightly surprised just the last name was accepted given the Stephen vs. Frederick possibility. I got this probably by somewhat of an accident... it was literally the first last name that ends in SS that popped into my head as the music started. I would have written a first initial on stage for sure though, just in case.
Top

Compliments to the writers on DD2, I particularly liked that one.

Had ham & cheese for ham on rye.

Needed more than 30 seconds to come up with Frederick Douglass.

Could not get The Kool & the Gang song and missed a bunch of clues in Classic Sitcoms.
DD: 3/3
FJ:

No guess for me. Couldn't come up with any "famous" names ending in 'ss' in 30 seconds.
Top

Ally getting DD3 wouldn’t have made a difference (even if she bet it all) as she is still getting crushed. But maybe she would have rung in more than once the rest of the game if she has a chance to win and isn’t just trying to stay above zero.

Speaking of zero, that was how many guesses I had on FJ.
Top

Famous 19th century American with a double S at the end of their name? Boom, Douglass, insta-get.
Ten Pound Hammer

Bob: Debra, where would your husband say is the most unusual place you've ever made whoopie?
Debra: The dining room.
Bob: Mike said it was at the library.
Debra: You told them THAT?!

(That has nothing to do with Jeopardy. I'm just trying to counterbalance Ally's boring story about the weather on her wedding day.)

I got stuck trying to think of a European country whose name is one letter different from Czonka.
Last edited by floridagator on Wed Jan 12, 2022 8:54 pm, edited 1 time in total.
I'd rather cuddle then have sex. If you're into grammar, you'll understand.
Top

StevenH wrote: ↑Wed Jan 12, 2022 2:06 pm For FJ I started by thinking of U.S. Presidents. I first thought of Lincoln, which then made me think of Stephen Douglas. I was able to make the leap to the correct person from there.

Congrats, TPH, I got there strictly from the crossword puzzle technique myself. I get many of the words before reading the clues. So far, I haven't thought of a second choice for a last name double-s, but I'm sure I'll be cranking them out when my CPU goes to idle.

I spent a few seconds of realizing I have no idea why someone would change (much less choose, based on a novel) their name. Giving up on that TOM, the first name I thought of was the correct name, but like Robert, I was thinking of the wrong guy. Since they took only the last name, I'm now 6/8 on Amy's missed clues.

Out of orneriness, I wonder if they would have accepted trebuchet for the catapult clue.

The game had promise as being competitive, (NFL metaphor warning) but once it got to the fourth quarter, it was time to call for consecutive quarterback sneaks from close to your own end zone. I don't remember the show ever using a two-word answer for the single letter different trick category. I don't try too hard on wordplay clues, too much aggravation. I was not ready for that, but at least I got to Marino over Griese.
Disclaimer - repeated exposure to author's musings may cause befuddlement.
Top

floridagator wrote: ↑Wed Jan 12, 2022 8:11 pm I got stuck trying to think of a European country whose name is one letter different from Czonka.

floridagator wrote: ↑Wed Jan 12, 2022 8:11 pm I got stuck trying to think of a European country whose name is one letter different from Czonka.