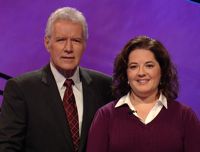 MarkBarrett wrote:The FJ clue put me in the right city and then I was left to guess as the names provided were not going to help me. Holmes & Watson seemed like an elementary guess and I went for them.

I see what you did there.

econgator wrote:They really need to have "seasons" longer than 3 episodes.

Oh, I don't know. I'd much rather have 3 wonderfully detailed, excellent episodes than 15 mediocre, filler episodes. I just wish we didn't have to wait so long between seasons!
Top

reddpen wrote:Did anyone else miss the obvious and go with Jeeves and Wooster? I'm assuming (always a danger) they lived in London, and am aware their relationship wasn't really that of flatmates, but the century seemed right. I'll blame this miss on overthinking and the presence of my mother-in-law... who when I paused the DVR said "Sherlock Holmes?" in about five seconds flat.

On my online Jeopardy! game, I put Jeeves and Wooster as one of the incorrect answers.
Was once hugged by Maggie Speak!
Top

I just now saw this episode.

My first guess was Fogg and his servant from Around the World in 80 Days. But I rejected that when I couldn't remember the other guy's name. I sort of know it, but it seems like too tough a name to expect people to spell. So I went with the correct pair.

All I know about holmes is that he lives on Baker Street and a bunch of irregular people read his books.

I wish they had finished the crooked Congressmen category.

I had never heard it called press ganging and also said impressment. Pre-called Ghent in that category. Kept screwing up languages by saying the country's name.
Top

I said Shanghai. I'm counting it.