OPENING REMARKS
Alex: Thank you, Johnny. Welcome, ladies and gentlemen. An excellently played game yesterday on Jeopardy! --except for final, which was missed by all three players. But fittingly, Justin, who had the most money going into the Final Jeopardy! Round had the most money coming out of it also, and that's why he's back here today to face Maire and Campbell. Nice to have you with us. Good luck. Here we go, the Jeopardy! Round, which today will feature these categories...

JEOPARDY! ROUND CATEGORIES
2 TERMS MAKE A NEW BAND NAME (5/5)
POLITICS (5/5)
SHAKESPEAREAN ACTORS (5/5)
GOOD TRY! (5/5)
FATHERLY NICKNAMES (3/5, including 1 correct Daily Double)
CONSONANT-FREE STATE CAPITALS (4/5) (Alex: You have to add the consonants in order to come up with the correct response.)

Campbell: The state flower of Minnesota. She had just moved to Kansas. I had, too, and she was a little homesick, so this was our third date, I think. Decided I would do something romantic for her. Turns out it's basically an endangered bog flower. Can't find it anywhere, let alone the state of Kansas. So had to default to a regular bouquet, but I told her what I was looking for, and she thought it was sweet and we ended up married, so it worked out in the end.

Alex: Which means what?

Maire: Well, I work for a small group travel company, and it's not adventure in the sense of, like, rock-climbing and white river rafting, but about the cultural adventure, so we have trips all over the world, all seven continents, so I spend all day talking about travel, and I get to travel a lot myself.

Alex: Have you ever planned any trips to South Africa?

Maire: Uh, well, I'm going to Kenya later this year, so I'm thinking about heading down to South Africa afterwards.

Alex: Wonderful vacation can be had there.


Alex: Now, Justin Nigro is our champion. Once worked with a 5-time Jeopardy! champion who now occupies a very important post in our government. Tell us.

Justin: That's right. Uh, once, uh, I was in state government in Ohio, and I worked for Richard Cordray, who's now currently the head of the Consumer Financial Protection Bureau, uh, which I got wrong in Final Jeopardy! yesterday...

Alex: Well, it made him feel good that you thought of him in that way, even though your response was incorrect at the time.

FATHERLY NICKNAMES $800: This merchant known as the "Father of the Dime Store" opened his first store in 1879 after borrowing $300

TRIPLE STUMPERS IN THE JEOPARDY! ROUND
CONSONANT-FREE STATE CAPITALS $200: Actually not in Hawaii: AAAEE

FATHERLY NICKNAMES $1000: In 735 this "Father of English History" died shortly after finishing a translation of the Gospel of St. John

FATHERLY NICKNAMES $600: This "Father of Angling" was a well-known writer of biographies, his first being a short account of John Donne
(Alex: The author of The Compleat Angler, [*].)

SOME "BUT"s ABOUT IT $1600: In traditional debate, each side makes both a constructive speech & this kind of speech

TRIPLE STUMPERS IN THE DOUBLE JEOPARDY! ROUND
LOOKING FOR LOVE ON REALITY TV $2000: Girlfriend, it's the network where you'll find "Find Me My Man" & "Love Games: Bad Girls Need Love Too"
(Maire: What is Lifetime?)

MUST YOU BE GOING? $2000: To this Dutch dependency that'a the southern third of a Caribbean island, yes; it gets a "double A" rating

LITERARY CLERGYMEN $2000: Hugo wrote that this Archdeacon of Notre Dame "had been destined from infancy... for the ecclesiastical state"

PREFINAL REMARKS
Alex: None of our contestants has a science background, and so no one is favored as we deal with SCIENCE WORDS. Here is the clue for everyone...

VENUSIAN MONOLOGUES/MARTIAN CHRONICLES
Lock-tie for first place; crush for second place.
Campbell: Wager $0 to guarantee your return for the next game, or, if you'd rather lose today than face Maire tomorrow, wager $22,000 to maximize your winnings (or $8,399 to keep from dropping into third place).
Maire: You don't have any guarantee at second place, but who cares when you've got a shot at tying for first? Wager $11,000.
Justin: You have the hope of surpassing Maire for second place if you come up with the correct response or if your opponent fails to. Bet between $4,201 and $6,799.

FINAL JEOPARDY! CLUE
Appropriately, this word from Latin for "unfold" isn't in the first edition of "Origin of Species", but does appear in later editions MISCELLANEOUS INTERESTING CLUES
POLITICS $400: (Kelly of the Clue Crew shows a seating diagram on the monitor, with seats categorized into red, blue, and green.) The seating arrangement used today in France's legislature is the same as in the 18th century, when these two directional 2-word terms for conservatives & liberals originated

CONSONANT-FREE STATE CAPITALS $1000: OOUU
(Alex: Yeah, we tricked... well, we tried to trick you on that last clue.)

HERE'S YOUR HAT $1200: This "aquatic" hat was once popular for summer wear

HERE'S YOUR HAT $2000: Liebchen, a Tyrolean hat is green und usually has one of these in the brim, from einem Vogel
[Alex reads the clue with a German accent.]

MUST YOU BE GOING? $400: To this French Riviera city, oui! Hit the Promenade de la Croisette & catch a film or 5
[Alex reads "Must you be going..." at the beginning of the clue, but it does not appear onscreen.]

Science Words
Appropriately, this word from Latin for "unfold" isn't in the 1st edition of "Origin of Species" but does appear in later editions. 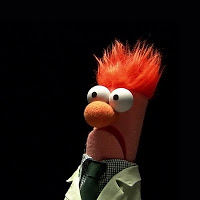 Might be the single worst wager I've ever seen. Even worse than
Top

Hopefully Vermonter didn't/doesn't watch today's game at the gym or wherever.

Did Campbell run the sports category?

xxaaaxx, yesterday wrote: Is it some sort of unwritten rule that 2nd place must make the all-in wager EXCEPT when it actually makes strategic sense? Yikes.

Maybe when I stop laughing I'll be able to form coherent thoughts, but for now I'll just repeat myself.
Top

Her wager was as bad as the Brazilian soccer team.
Top

Really now? Did that just happen? (Once again, bad wagering is prevalent in Jeopardy!. Tsk, tsk, tsk.) If anything, she would have realized that she was a couple of dollars away from it being a lock and bet everything, knowing that that was the only way to win. I was thoroughly expecting there to be co-champions, and yet now we have to wait once again.
Jeopardizing questions since 2004!
2014 Jeopardy! Teen Tournament Champion
Top

"I hate playing Jeopardy, and I really don't want to play again... you go ahead and have this one, Campbell!" -- Maire
Top

"Literary Clergymen" was damn hard. My first 0/5 in a long time. The only one I might have plausibly gotten was "The Exorcist." Ran "Look at the Time" and "Must You Be Going," which saved my Coryat.

I had a good game. I was a little slow in the J round, blanking on some things that should have been obvious. I had a momentary brain fart on Nancy Pelosi, muddling her together in my mind with other California politicians like Diane Feinstein and Barbara Boxer. I also blanked on Michael Redgrave's first name, and unthinkingly blurted out "bipartisanship" instead of "partisanship".

However, I made up for it in DJ, missing only four clues.

Perhaps more importantly, the word "evolution" was conspicuously absent from the clue. Sometimes, FJ clues can be approached in that way: you "squint" a little bit, and ask yourself "What word is suggested by the topics in this clue without being explicitly in the clue?"

I didn't like the band names category in the J round, and I find that I don't usually like those categories (even though I went 4 for 5 in this one). Am I just being fussy? Or do other people share my distaste for those categories? My favorite trivia questions rely on pre-existing interesting facts about the world, not "read the writer's mind and decide what two words the writer liked the sound of."
Top

OK so..J! writers, I have a suggestion. Find some lighter fluid, and pour it all over that Band Name category. Then set it on fire. Once the fire burns itself out (hopefully not before consuming your writers' notes for the rest of the season), flush the ashes down the toilet. For refreshment, stick your heads in the bowl while it swirls.
Last edited by xxaaaxx on Tue Jul 08, 2014 7:46 pm, edited 1 time in total.
Top

I thought the New Band Names category was sort of ridiculous. I hope we don't see it again.

Edit: I see someone expressed my opinion much more gracefully.
Top

xxaaaxx wrote:OK so..J! writers, I have a suggestion. Find some lighter fluid, and pour it all over that Band Name category. Then set it on fire. Once the fire burns itself out (hopefully not before consuming your writers' notes for the rest of the season), flush the ashes down the toilet. For refreshment, stick your heads in the bowl while it swirls.

*nod* Maire's FJ wager was better than this category.
Top

Got FJ (fun fact: e+volo=roll from).
Question: If you were Campbell, would you take the guaranteed $22k or try for the win? I'd do the former.
Top