Hello Boardies! This is my first TD and I felt there is no better way than to bring in a new season than to have questions that all relate in someway or form to the Fall season. Especially after the blazing summer heat that we had, it is nice to bring in the cool and beautiful autumn weather. Every question will have some relation to the fall season in some way.
1. Fall TV. One of the best things about the Fall season is the slew of TV shows that are set to broadcast. TV show premieres for a new show or a new season causes captures audiences of all that have eagerly awaited them since throughout the summer. This question includes nine scenes pertaining to TV shows that are to play this upcoming fall season. Choose ONE answer by just giving the name of the TV show. If the image is too small, there is a link below the image to direct you to another page that shows a larger image of the question.

BONUS. Name the real surname of the actor of your chosen answer for -3 points.

NOTE: For the picture in the bottom right, just give the name of the man on the left. 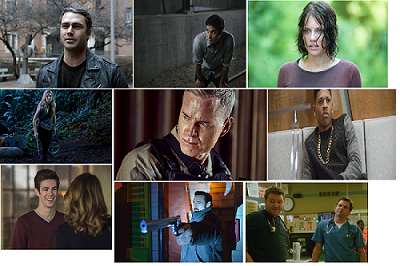 
3. The World Series. Also known as the “Fall Classic” is a staple in American History every October where the two best baseball teams face off to win the ultimate prize in Major League Baseball. Throughout the MLB’s storied history, there is no pressure filled moment than playing in a Game 7 where one decision can either cost or win you the championship. Many teams, including their die-hard fans have tasted the sweetness of victory and the bitterness of defeat. For this question we are going to look back at the last 50 years. Since 1965, name ONE team that has WON and LOST a Game 7 in the World Series. This ONLY includes teams that have maintained the same team name and location.


4. Election Day. Every four years in early November, we conduct our constitutional right after spending months of watching debates and hearing candidates talk about how they can make America great again. Did you know that long ago, presidential elections initially were held throughout the month of December? It wasn’t until 1845 when Election Day became the official day of voting. Throughout our country’s election history, most presidents won their respective elections by receiving the electoral and popular vote. There are moments in our history where the presidential candidate lost the popular vote, but still became president. Name ONE of the winning or losing candidates in any of the four elections.


5. Thanksgiving. The signature holiday in Autumn in America is definitely Thanksgiving. To us Americans, we think of Thanksgiving as a day where we give thanks and appreciate our families by celebrating with feasting on tasty food, but families in other countries celebrate in different ways. Name ONE country OTHER THAN THE UNITED STATES that celebrates Thanksgiving in some way or another.


6. Horror Films. During the Fall, we see several horror films pop up in theaters with many of them being terrible. Despite this, many of these films make sequels and reboots because it brings in a lot of money. Several horror villains are major pop culture icons in our society and are widely recognized. Name ONE of the top 10 highest grossing horror films of all-time. This list is according to Forbes.com, and is all-time DOMESTIC and NON-ADJUSTED FOR INFLATION gross totals.


7. Lupus. Lupus Awareness Month is now celebrated in May, but not long in the distant past was it celebrated in October like many others. Answer ONE of the following questions pertaining to celebrities from our past and present, that have medically confirmed to have had Lupus or even died from Lupus.

a. Before this Englishman received “kisses” from a rose as a successful pop artist, he was a model and traveled around Asia in a funk band called Push.
b. This “Wise Blood” author studied journalism at a writer’s workshop at the University of Iowa where she met Robert Penn Warren.
c. This actor was everyone’s “Favorite Martian” back in the 1960s.
d. This comedian and TV host must have been “all that” as a kid growing up in San Diego before now helping find “talented” individuals throughout America.
e. This actress turned pop artist played in several roles in television such as “Walker, Texas Ranger”, “Wizards of Waverly Place”, and even “Barney and Friends” where she worked with fellow superstar Demi Lovato.
f. This R&B singer had her most successful album in 1996 with a signature song that she actually hated, it must’ve broke her heart.
g. This former baseball player and seven-time All-Star was solid as a “rock” as leadoff hitter for most of his career with the Montreal Expos.
h. This American journalist and his CBS crew wore out six motor homes of the course of 25 years that he used to travel across America with captivating stories about America and its culture and history.


8. National Book Awards. It is no Pulitzer or Nobel, but every year in the middle of November, some of America’s best writers are given these distinguished awards for their excellent work. Established in 1936, some of the best authors in American History have received this award spanning several genres including Fiction, Poetry, Nonfiction, and Children’s Literature. In fact, a few have won the award multiple times. Name ONE person that has won the National Book Award for Fiction at least twice.


9. Languages. The fall season is also known by the word, Autumn. For this question, choose ONE of the following words that also mean “autumn” in another language by giving the name of corresponding language.
a. automne
b. autunno
c. otoño
d. sonbahar
e. Őszi
f. herfs
g. taglagas
h. autumnus
i. oсень
j. fhómhair
k. höst

BONUS: For bonus points, name the corresponding Secretary-General of the chosen above answer for -5 points. Spell the name as best as you can, I will be lenient in judging.
Last edited by oduguy22 on Mon Oct 10, 2016 9:07 am, edited 18 times in total.
erectile dysfunction
Top

I'm looking forward to playing this - should be fun!

Could you please include a way to make the pictures for question 1 larger? Some of the faces are hard to see.
Top

1) Could you please number the questions to make submitting an answer easier?

2) For the Horror films: Is that all-time gross or adjusted gross?
Top

Thanks so much you guys! I have updated the questions with numbers. And the top 10 horror grossing films is domestic, non-adjusted totals for inflation (according to Forbes.com)

I'm sorry but for some reason the attachment would only let me make the image to a certain size, I will try to find another way to post it somewhere so it is more clearer. It was initially much bigger.

I will updates the questions, thanks for your input!!!
erectile dysfunction
Top

oduguy22 wrote: I'm sorry but for some reason the attachment would only let me make the image to a certain size, I will try to find another way to post it somewhere so it is more clearer.

Attachments will be displayed only as large as the bulletin board software internally allows, which we have no control over. If the original image itself is larger and you want to display it at full size, then you have to post it to an external site -- imgur.com, for example -- and reference it via the "img" tag.
"The COMPLETE GUIDE To Republican Ethics: tRump Edition" is right ===> here
Top

For Question 1, I have updated with a link at the bottom for the picture just in case you cant see that one, it should take you to a page to see a bigger picture.
erectile dysfunction
Top

oduguy22 wrote:For Question 1, I have updated with a link at the bottom for the picture just in case you cant see that one, it should take you to a page to see a bigger picture.

Less than eight hours to go, so anyone who still hasn't answered please do!
erectile dysfunction
Top

Submissions are finished, just want to make sure this is the list of players I have for the TD:

I will release the standings tomorrow, but here are the answers for all of the questions:

Is it too late to enter?

I'd probably still hit all the sheep.
Was once hugged by Maggie Speak!
Top

Sure send me a PM.

I am almost done finalizing but if you wanna enter one in before I get the final scores you can!
erectile dysfunction
Top

Why allow someone to enter after you've revealed the correct answers?
Top

Yes, that is true. I guess I want to give him a last chance in case he didn't get to submit. That's why I hid the answers, i figured anyone who is playing would be playing the honor system anyways.

I just finished the final standings, and i didn't hear from him, so its over regardless.

The standings will be announced tomorrow. I hope everyone who did play enjoy it. I enjoyed making it!
erectile dysfunction
Top

I was asking jokingly, but thanks for your graciousness. My sense of ethics wouldn't let me enter after seeing the answers (I didn't enter because there were a couple I had no clue on).
Was once hugged by Maggie Speak!
Top

I want to thank all who participated and it was a fun TD to make.

BobF wrote:I was asking jokingly, but thanks for your graciousness. My sense of ethics wouldn't let me enter after seeing the answers (I didn't enter because there were a couple I had no clue on).

I didn't think you would enter. It was more of a general question to the OP.
Top

oduguy22 wrote:I want to thank all who participated and it was a fun TD to make.

So, where are the results for each question?
"It is better, of course, to know useless things than to know nothing." -- Seneca
Top