Three times Deborah uncovered the final DD needing to go for broke. Three times she failed to do so. She would have lost either way tonight, but it would have been nice to see her maximize her chance of victory.

I ended up one Carolina away on FJ!, picking Duke.


French Rage wrote: ↑
Tue Apr 18, 2017 12:29 am
Do you think they would have accepted just "Truman" instead of "Margaret Truman"? The contestant got it wrong by using the first name Bess, but I'm wondering if someone at that point could still have gotten it by just the last name.

I doubt it. Typically, for people who are famous because of a relative with whom they share a last name, J! requires the full name.
Sprinkles are for winners.
Top

Think of it this way. Without people like you, how would people like me know that we're the cool kids? Does that make you feel better? It makes me feel better.
Top

I put Calhoun in Georgia, so I was one of the not-so-cool kids with Emory. Said it with some confidence, too (my wife wasn't around, so only the cat, perhaps, was a witness to my humiliation).

The trouble with tribbles... still makes me laugh after decades. Really a far better allegory for the fate of mankind than any Mike Judge movie.
Top

French Rage wrote: ↑
Tue Apr 18, 2017 12:29 am
Do you think they would have accepted just "Truman" instead of "Margaret Truman"? The contestant got it wrong by using the first name Bess, but I'm wondering if someone at that point could still have gotten it by just the last name.

I actually thought they would, given AT's pause before negging "Bess Truman." Given the show's penchant for accepting "Johnson" for LBJ (and presumably Andrew Johnson), I wouldn't put them past taking just "Truman" on this one.

When I saw Calhoun pop up, I immediately jumped to Yale, given the recent controversies there over the name of one of its residential colleges. But, I knew Calhoun <> South Carolina partly from school and partly from seeing his giant statue + mansion in Charleston, so I started going through schools there (College of Charleston, The Citadel) before settling on Clemson about halfway through the music. I didn't think of Furman in Greenville, but that certainly would have given me pause.

Yet another neg-heavy game for me, many of which are coming at the beginning of rounds. I'm thinking I should take the commercials in real time instead of fast-forwarding, as well as taking a pause between jotting down categories and starting the clues.
Top

When I saw AT holding the furry ball and heard him mention Capt. Kirk, I thought it might be a question about Shatner's hairpiece. Bizarre, sure, but that was the first thing that popped into my head.
Top

Did anyone else consider Wofford for FJ?
Top

So I went with The Citadel. It is in Charleston, South Carolina, and is a military school much aligned with the Old South. But it probably isn't that well known nationally and an unlikely choice for a FJ clue.

It's also an unlikely surname for Calhoun's son-in-law.

Good old Joe Citadel. He was quite a guy.


Yeah, there's that. Sadly, that didn't dawn on me until later.

I am a bit surprised Vandy was such a go to response as that was famously named for a former Jeopardy winner's ancestor.

I think they'd have taken just Truman on the battleship clue. It answered for a "presidential child (or maybe it said daughter)" and Margaret was an only child. But I believe you'd need her first name on a rebound since someone else had gotten it wrong.

I got World Cup on a guess since 1974 was a World Cup year. But I didn't know the trophy was just called the World Cup Trophy.

Yes, she should have bet bigger on that last DD. But it would have broken the lock and she probably isn't a big sports fan. But Kevin going to the top of the category was a much worse error.
Top 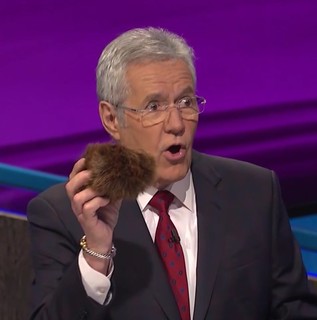 Alex didn't have to go far for the Tribble; he just plucked it off his office shelf. I wouldn't be surprised if it's left over from the infestation.
J! Archive
[Fleming ToCs]
Top

Count me as one who got this FJ late in the music, possibly due to the football events of last January.

A. For what state is John C. Calhoun known?

B. (assuming you can come up with S.C.) Name a famous university in S.C. named for a person.

My thought process was "Um... Calhoun County is where Battle Creek is, but I don't think there's a famous university in Battle Creek."
Ten Pound Hammer

Bamaman wrote: ↑
Tue Apr 18, 2017 7:43 am
I am a bit surprised Vandy was such a go to response as that was famously named for a former Jeopardy winner's ancestor.

It's a cool kids thing. You wouldn't understand.
Top

"What Clemson" isn't really a question.

Sure it is -- if the answer is "Oh. THAT Clemson."
I'm not the defending Jeopardy! champion. But I have played one on TV.
Top

WLT South Carolina? I got that it was the South from "plantation". Is "John C. Calhoun" a Pavlov for SC?

I didn't go to South Carolina either. I started trying to think of colleges in Mississippi, and then went the other way to Louisiana with Tulane.

skullturf wrote: ↑
Mon Apr 17, 2017 9:18 pm
I'll admit that I got confused by the South America clue. I know the relevant facts, but I just had trouble processing the clue in real time.

(There's a different trivia fact I've heard before, and it got in the way even though it wasn't needed here. There are exactly two countries in South America as a whole that don't border Brazil. One of them is Ecuador and the other is Chile. Not relevant for this clue, of course, but for a moment I thought they were going to ask about that and then I just got confused. We want a country to the north of which country again? Easy for it to not click right away.)

Same. This is normally a wheelhouse category, but I just got lost there, and the contestants answering S. American countries didn't help me with the rebound (as I was still trying to figure things out by the time the first contestant answered.)

For some reason, I thought the clue said it had to be in South America, so I never went to Panama. I thought that it could be Venezula, but I was pretty sure it shared a border with Brazil.
Top

TenPoundHammer wrote: ↑
Tue Apr 18, 2017 12:42 pm
My thought process was "Um... Calhoun County is where Battle Creek is, but I don't think there's a famous university in Battle Creek."

Ten counties in Michigan are named for cabinet members in the Jackson administration, Calhoun being one (Calhoun was Andrew Jackson's first VP).
Top

TenPoundHammer wrote: ↑
Tue Apr 18, 2017 12:42 pm
My thought process was "Um... Calhoun County is where Battle Creek is, but I don't think there's a famous university in Battle Creek."

I had a quip all ready to go until some research before posting told me that Kalamazoo is in a different county from Battle Creek.

Jamie was one of 3 alternates held from last week's shows. Maggie kept confusing both of us, reversing our names. Close enough, I guess?

I didn't watch this in studio and just watched the episode today. Looked at final online early, quick guessed Vandy without thinking. With more time, would have pulled the switch. Will count as wrong for the survey.
Top

All this talk about Margaret Truman brings to mind the much debated question, "What president's daughter wrote the best seller, "Murder in the White House"?
Top

The highlight of today's game? This:

A proposed new category: "The Trouble with Trebeks"
I'm not the defending Jeopardy! champion. But I have played one on TV.
Top
Post Reply
63 posts