FINAL JEOPARDY! CLUE
In 1939, turned down by 2 local theaters, Howard University was able to get an outdoor venue for this singer’s yearly concert

Correct response:
Spoiler
Show
Marian Anderson (Alan - Who is the one who sang at the L.M.)

James got to talk about his sign-in sign:
Spoiler
Show 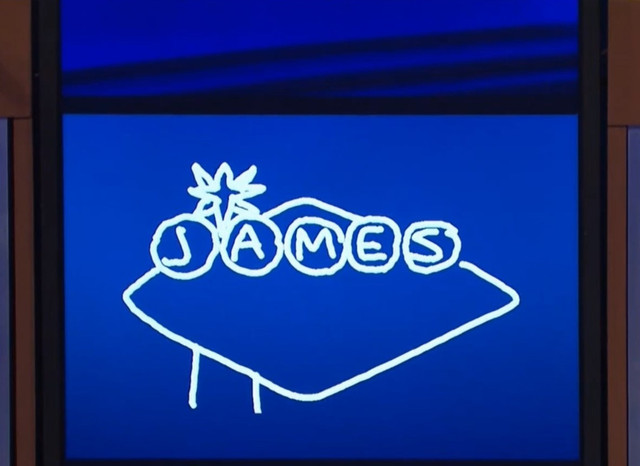 Everyone got a chuckle about "ALL IN" being a category with James playing and he went there first. Lindsey had the laugh last finding the DD in the 2010s and doubling her score.

Alan was in contention after opening the DJ! round with DD2 and doubling to 8000, yet lowered his chances with a couple of unfortunate negs. Great job by Lindsey to survive getting James in the QF round and giving herself a decent shot at a wildcard and no James in the semis.

James got 4/5 in INITIALS TO ROMAN NUMERALS TO NUMBERS III while I would still take Ken on that type of category against James.

Credit for my solving the FJ! clue goes to an unusual source as this was repeated viewing in the early days of having a VHS player:

In the category so what doesn't matter here are some in the neighborhood of the 30,635 James put up in his QF match:

Thanks Andy: I overlooked this one for a big number going into the FJ! round

The no shout-outs rule is even dumber than the no ties rule.
Top

Is Alan called "John" in the FJ! spoiler?

Any guesses as to who he meant by "one who sang at the L.M."?
J! Archive
[Fleming ToCs]
Top

L.M. is the Lincoln Memorial, the outdoor venue referenced in the clue. It seems Alan knew what it was talking about but couldn't remember her name.
Never been on J!, but once won a knockoff version that aired on local access TV.
Top

L.M. is the Lincoln Memorial, the outdoor venue referenced in the clue. It seems Alan knew what it was talking about but couldn't remember her name.

Unconsitutional
Hall having reckoned her
Coloratura not
Up to the norm.

Ok, it isn't very famous. Anyway my memory was also refreshed by having pointed out her building at 1200 Fifth Avenue just a while ago.
I'm smart and I want respect.
Top

Whatever anyone else says about this game, it gets my vote for the toughest pair of boards I can recall in years and years, regular season, tournament, any damned thing. Holy crap!!! I got 10 right, 2 wrong in each of the two boards, along with a total of 36 stand-and-stares. I hang my head in abject disgrace (unless a whole bunch of you rescue my shattered ego by assuring me the boards really WERE that hard....)

And to top it off of course I couldn't recall the correct black female singer and went with Mahalia Jackson in FJ.


And all props to James for handling all of this so effortlessly. He has to become (as if he wasn't already) a strong favorite to win this puppy.
Top

Ripped through the first round but the second round kicked my ass. Only managed 4 correct below the $800 row.

Would’ve swept It’s Not Australia had they gone top to bottom, I wasn’t ready for the theme and missed Andorra.

Managed to avoid the Amundsen negbait, but couldn’t pull Larsen out of my head for the life of me. I just went to the Fram Museum in August, too!

LOL at James’ podium art, that was awesome. Glad he enjoys Mark Stone, my team basically gave him to Vegas at the trade deadline last year and I’m still not over it.
Top

Congrats to James on the win. Expected, obviously, but anything's possible in J!, so I'm glad nothing out of the ordinary happened with him today.

In my semifinalists predictions I originally had Lindsey as the fourth wildcard but switched her out for Alan. Looks to have been a poor decision.
Top

Ripped through the first round but the second round kicked my ass.

Yeah...that was about what I expected. Sweet lord, 30k, only hit one DD, and didn't even need to bet much. 31k Coryat!!! If that isn't a tourney record it's got to be close. Also got some good laughs out of me, with his interview and his "tru....ly disappointing" wager, which had me cackling.

1939 + turned down by theaters + outdoor performance? Instaget FJ. Tough break (and tough draw!) for Alan, but there's a good chance his 11999 wouldn't have help up anyway. In Lindsey's shoes, I would've aimed for at least 16k. Though tbh, a 10k-ish pre-FJ score is about the crappiest spot to be in; any lower and you just go all-in, higher and you're usually in good shape, but 10k? How much do I bet for a "safe" WC score, how far am I willing to risk falling if I get it wrong...meh. Yes yes, I know, predicting WC cutoffs is a fool's errand anyway. We'll see.
Last edited by xxaaaxx on Wed Nov 06, 2019 8:40 pm, edited 1 time in total.
Top

never heard of that anderson person before
Top

lindsey's wager was awful...if she misses she has 7k and change...like that would be good enough for a wild card...the only wager she should have done was all in...no idea why she even bothered with such a bad wager in a tournament format...didn't much for her before and with that wager i really hope she misses out on a wildcard
Top

Alan said Admundsen
I'd rather cuddle then have sex. If you're into grammar, you'll understand.
Top
Post Reply
56 posts