4/2 FINAL JEOPARDY! CLUE
The portrait here hangs in the building of this cabinet department & depicts a man who once ran it 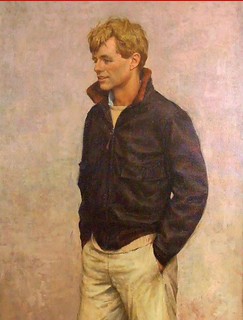 4/3 FINAL JEOPARDY! CLUE
In 1899, a reunion of this alliterative squad took place, with the governor of New York fittingly on horseback 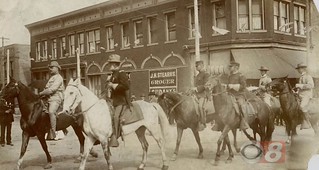 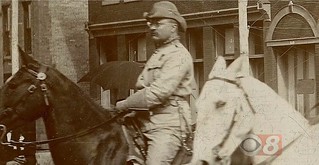 4/4 FINAL JEOPARDY! CLUE
The father of this future composer was a French teacher at the Warsaw Lyceum, where the child would later attend

4/5 FINAL JEOPARDY! CLUE
Tommy Lee Jones won the Best Supporting Actor Oscar for this movie based on a TV series that premiered in 1963

4/6 FINAL JEOPARDY! CLUE
One active, one dormant, Madera & Concepcion are volcanoes in this body of water that shares its name with a country

SHAKESPEARE IN GOV $1200: John F. Kennedy memorized the "St. Crispin's Day" speech from this play & would often quote it

THE FICTION SECTION $1000: "The Bridge of San Luis Rey" earned this author a Pulitzer Prize

THE OLD COUNTRY $2000: In 1859 the old principalities of Walachia & Modavia joined to create this country

The extra clues have two triple stumpers followed by one the players had correct.

Had Henry V but clammed.
Top

Treasury (did not recognize Kennedy in the picture)
Dvorak (can't keep him, Chopin, and Liszt straight)
Gulf of Mexico (nothing about the clue, including the correct response, was familiar; I wanted to have something and the only other idea I had was the Panama Canal)

Have seen the movie The Fugitive, but none of any TV version.
Oh, what has science wrought? I sought only to turn a man into a metal-encased juggernaut of destruction powered by the unknown properties of a mysterious living crystal. How could this have all gone wrong?
Top

Couldn't come up with any reasonable guesses on Monday or Friday. Men in Black on Thursday.
Never been on J!, but once won a knockoff version that aired on local access TV.
Top

I know there's a Lake Nicaragua, but that doesn't help much when I think of every Central American country except Nicaragua.
Top

Have seen The Fugitive movie, more than once, but don’t think I ever saw the TV show.

Did not recognize the volcanoes, but they led me to think of them being located in a lake, which helped.
Top

Other days I would've gotten Wilder in time.

Seen The Fugitive movie, not one episode of the show.
The best thing that Neil Armstrong ever did, was to let us all imagine we were him.
Latest movies (1-10): A Hard Day's Night (7), Jabberwocky (6), Florence Foster Jenkins (7), The Man in the White Suit (9)
Top

I walked into the room too late to hear the Monday FJ question read, and at first glance I thought they were showing JFK.

I wanted to post a sepia-tone snapshot here in honor of the Tues FJ. My LEGO TR posed on horseback outside La Castaneda in Las Vegas, NM, the site of that 1899 reunion, but I don't think I have the skill to get it out of my phone's photo gallery.

Still couldn't get a 5/5. Perhaps some day.
Top

Didn't recognize that as anyone, much less RFK.
Ten Pound Hammer

...damn, so close!
Got lucky on Fri...wrote the correct response, then thought...Wait, is there such a thing? I know there's a Lake Managua, I must be thinking of that... But I had nothing better, so I stuck with it...

"The Fugitive" was a favorite in my household growing up. We were glued to the screen for the last episode when the series was resolved. So were a huge slice of other viewers - the highest rated TV series episode up to that time. The movie? Ehhh...Doubt I would have remembered that TLJ won the Oscar if it wasn't for the TV hint.
Top

8/8 second week in a row! I didn’t know the volcanoes in Lake Nicaragua but I know The Rolling Stones played a benefit concert in 1973 or so after an eruption ruined Managua. I think I’ll do well this coming week unless they ask about really recent music or some awful CW tv show.
Top

The first to were pretty quick gets. The rest of the FJs were not going to happen.

Extra clues? Lit, lit, and the history of Eastern European geography? Not a chance for me.
--Peter
Top

Johnblue wrote: ↑
Sat Apr 07, 2018 10:41 pm
8/8 second week in a row! I didn’t know the volcanoes in Lake Nicaragua but I know The Rolling Stones played a benefit concert in 1973 or so after an eruption ruined Managua. I think I’ll do well this coming week unless they ask about really recent music or some awful CW tv show.

The CW has some good shows. The ones with illusionists or the improv specialists. For the regular line-up I hear you although I enjoy Riverdale.

For the music here's two that could appear: "Perfect" by Ed Sheeran and "Wait" by Maroon 5
Top

I usually don't participate in this thread, though I do check it out, but I need to chime in to extol the virtues of The Fugitive, both the original series and the movie. I'm with Davey in that the show was must watch family viewing back in the early 60s and, yes, we're both showing our age. I have the two part finale on dvd and I do watch every few years. Still beats almost all of the stuff on network tv these days, though I have to admit there's a lot of brilliant stuff elsewhere. As for the movie, I love it! Not one of my personal "ten best" but certainly one of my ten "most enjoyable". Harrison Ford and Tommy Lee Jones and the rest of the ensemble (Gerard's whole team and those idiot Chicago cops) are terrific! I just may stay up late and watch again.
As for the scoring, I had a very good week, getting all the FJs with ease and missing only the third extra. Would that it be so always!
Top

Need to get better at Central America; it comes up a lot.

Saw “The Fugitive” movie on its theatrical release; did not see the TV series in first run (before my time) but have seen a few episodes in syndication.

Was shocked at the stand-and-stare for “Henry V”; maybe Shakespeare’s most famous passage after Hamlet’s “To be or not to be” soliloquy. Maybe the “St. Crispin’s Day” clue threw them off?
Top

I recognized that it was a Kennedy, and then "this cabinet department" made me realize it was RFK, but I was looking for a department that filled "Secretary of ______" so I was doomed to miss.

This is the first time I can recall hearing of the "St. Crispin's Day" speech, and am willing to contend that "Is this a dagger which I see before me," "All the world's a stage," and "Has not a Jew eyes" are more famous than it.
Top

I didn't realize how close I was to my first ever 5/5.

I'm getting better, anyway. I knew that there was a pavlov for polish composer, but I couldn't pull it. I was trying for a polish sounding name.
Top
Post Reply
38 posts